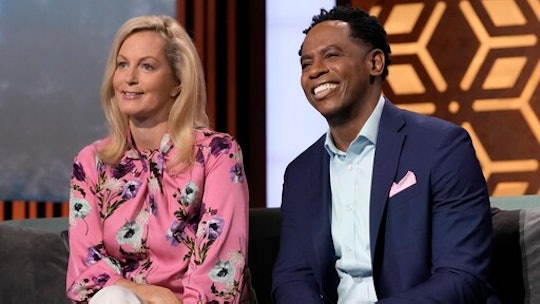 The Parent Test Invites Parents To Criticize Each Others’ Parenting Styles

Your group chat will definitely have some choice emojis for this new reality show.

It’s probably one of the biggest taboos in parenting — telling a fellow mom or dad in the deep trenches of raising kids how they should or shouldn’t parent their own children. And while offering your unsolicited advice to another mom on their preferred parenting style is surely the fastest way to get yourself kicked out of any playgroup, ABC decided to make a whole television show about it called The Parent Test.

The Parent Test is a new reality show that lets you weigh in on others’ parenting choices.

Here’s the gist: two hosts gather 12 sets of diverse parents with a wide-range of (and often conflicting) parenting styles (more on that in a minute). Each family is given a challenge that is pre-taped, and then all the parents sit on a bunch of couches in a TV studio and basically praise or criticize each other (while also taking copious notes on each other’s parental performances). Since this is reality TV, of course there is a voting process and “winner,” but no actual cash prize beyond bragging rights. But The Parent Test claims its intentions are good, and that they’re merely on a mission to figure out which way is the right way to parent, and what parenting style works best.

How can you watch The Parent Test?

The Parent Test airs on Thursdays at 9 p.m. EST on ABC and is also streaming on Hulu. A special premiere episode aired on Dec. 15 and new episodes will begin airing again on Jan. 5. If you’re a fan of reality TV and putting moms and dads under the microscope and then on blast, this one’s for you.

While psychology tells us there are four basic parenting styles — authoritarian, authoritative, permissive, and uninvolved/neglectful — there’s a lot of individuality on that spectrum and The Parent Test, delves into a dozen. (Though let’s be honest — there are as many ways to raise a child as there are parents on the planet.) The 12 identified on the show are:

While there’s a lot of overlap between the different styles of parenting featured on the show (the Intensive and High Achievement parents often appear to be in sync, for example), each family brings a unique perspective to child-rearing.

The first episode features a high dive and “Yes Day.”

Note: Mild spoilers for Episode 1 of The Parent Test are ahead.

To get a sense of the show, the first episode tells you everything you need to know. As each family is faced with a challenge, the parents watch and critique how their fellow parents handled the situation and if their children “succeeded.”

The first test is a high dive. While the the New Agers boast that they allow their kids “to do dangerous things if they want to do dangerous things,” ultimately they don’t push their kid to jump off the high dive. While the intensive parents watch their shivering kid cower from her very justifiable fear of heights, her mom does her best to push her to leap, while dad is OK with her backing out. The natural and routine parents are the ones who have the most success, assuming that jumping off a high dive counts as some of indicator of parental success.

The second challenge features a “Yes Day,” where the parents have to go along with anything their offspring desires. And while most of the kids opt for harmless activities like eating chips in their parents’ bed or swimming in a blow-up pool, one of the kids shocks one of his two dads by requesting to slap him. It’s a unsettling moment when the father indeed allows his little one to have at it, but the situation also opens up a conversation on why the request was so wrong in the first place and how the other father is triggered by violence based on his own experience being bullied as a child.

The Parent Test hosts bring a mix of humor and expertise in child rearing.

To make the show both entertaining and educational, The Parent Test has two hosts with different backgrounds and qualfiications. Author and comedian Ali Wentworth, who shares two teenager daughters with GMA anchor George Stephanopoulos, brings on the laughs. To balance out the humor with some clinical psychology, Dr. Adolph Brown joins Wentworth to deconstruct how the parents handled each challenge. With eight kids of his own, Brown’s home life might be even more impressive than his professional training.

“With small children, the world is a spectator sport. Everyone is looking to see if your children are going to behave,” Brown told the New York Post. “I think that all the styles had merit. The issue was what style would be the best when it comes to the overall life of the child — that child going into the world and being a full functioning citizen — healthy, happy, kind.”

While the show touts itself as “a place to learn, listen, and see other people’s perspectives,” it can definitely get a little dicey between the parents when they criticize each others’ parenting styles. But the most interesting thing about The Parent Test isn’t actually the drama that’s stirred up between parents who disagree, it’s the drama that’s dredged up between each individual parent and their own inner child. In other words, there’s a lot of tears. Apparently electing to watch how other parents choose to raise their kids can bring up very emotional wounds and memories from childhood.

While it’s definitely interesting to see how different parents deal with their children, the design of the show doesn’t entirely make sense. Because kids are all so unique and different, there are too many variables involved in the outcome of each challenge. Like with the high dive, some children are obviously more naturally adventurous and just take to flailing themselves off sky-high structures, regardless of what their parents are like or if they trust their dads waiting for them in the chlorinated water below.

But if there is one thing The Parent Test definitely gets right, it’s that no matter how you choose to parent, your kids make the best (and hardest) teachers. And no matter how ready you think you are or how hard you think you studied, there will always be another pop quiz that you will feel woefully unprepared for.

This article was originally published on Dec. 21, 2022