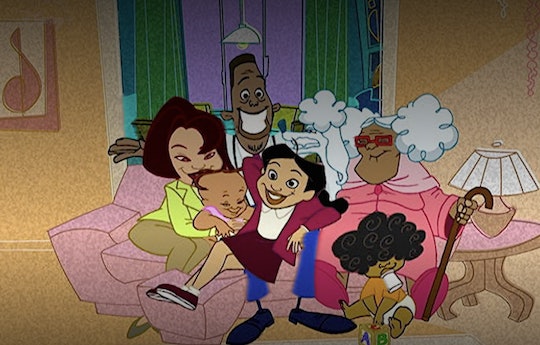 Lizzo, Lil Nas X, and Tiffany Haddish will drop in!

It's been 16 long years since we've heard "TRUDY," but don't fret because a Proud Family reboot called The Proud Family: Louder and Prouder is on its way. Disney has released an official first look at the animated series and more exciting news, including the addition of LGBTQ+ characters as well as a bunch of celeb cameos, so here is everything you need to know before it premieres next year.

The Proud Family Reboot Is Coming To Disney+

Penny Proud Will Be In High School

Just like in the original series that aired from 2001 to 2005, The Proud Family: Louder and Prouder will center around Penny Proud, a 14-year-old girl trying to navigate the ins and outs of school, boy crushes (like Johnny Lovely), and family, including her overbearing father Oscar. In the reboot, Penny is still "14 and loving it," according to Farquhar and Smith. However this time around, she will be dealing with the jungle of high school life, in addition to the family, guys, social media, and social causes, as BuzzFeed reported.

Kyla Pratt will return to voice Penny in the reboot. In an interview with TV Insider, the 34-year-old actress said the Disney show was part of her childhood for years and although she is excited about the reboot, she's feeling some nerves. "It was really scary at first, knowing it was coming back," she told TV Insider. "I hope we’re able to do it justice. A lot of things are getting rebooted and to me, it’s only best to go backwards if it’s going to be absolutely great."

And what's Penny Proud without her crew? Karen Malina White will return as Penny's BFF and partner-in-crime, Dijonay Jones. Soleil Moon Frye will also lend her voice to freckled-face Zoey Howzer and Alisa Reyes will voice Penny's frenemy, LaCienega Boulevardez. And new to the gang is a character named Maya Leibowitz-Jenkins, voiced by Keke Palmer, whom the producers call "woke."

The Proud Family was always one of those shows that went there, from racial discrimination and activism to feminism. And the reboot will be no different. Pose actor Billy Porter and Zachary Quinto will voice Randall and Barry-Leibowitz-Jenkins, the mixed-race, gay parents of 14-year-old- activist Maya Leibowitz-Jenkins, voiced by Palmer.

And A Bunch Of Celeb Appearances

The guest appearance lineup is definitely something to get loud and proud about! According to Variety, guests include Lil Nas X and Lizzo. Other hip-hop artists such as Chance The Rapper and Normani will also make appearances, as well as actresses Tiffany Haddish, Jane Lynch, Eva Longeria, Gabrielle Union, Marsai Martin, Holly Robinson, and actress and producer, Lena Waithe. Other big names include Blackish’s Anthony Anderson, Lovecraft Country’s Courtney B. Vance, Glynn Turman, and Lamorne Morris.

Al Roker will return and reprise his role as the slick, wish-granting genie. (Spoiler alert: remember the one episode when Penny wished Bebe and Cece were teenagers and Al made it happen! But that wish went left pretty quick.)

Also, expect to see some Olympic faces such as Gabby Douglas and Laurie Hernandez. The mother of Queen Bey, Tina Knowles-Lawson, will also make an appearance.

The Whole Proud Family Is Returning

Penny's twin siblings, BeBe and CeCe, are not babies anymore — they're toddlers! "They can talk ya'll, but it's all gibberish," Farquhar said in the sneak peek.

Trudy, Penny's mother, is the owner of her own veterinarian business, Trudy's Pet Ambulance. Penny's dad Oscar is "more overbearing than ever" and still holding it down with Proud Snacks. Uncle Bobby, Penny's uncle, is apparently still Suga Mama's favorite son. As for Suga Mama, the producers say she is still "the truth-teller of the family."

Tommy Davidson (Oscar Proud), Paula Jai Parker (Trudy Proud), Jo Marie Payton (Suga Mama), Cedric the Entertainer (Uncle Bobby) and the rest of the cast will all be reprising their roles in the Proud household.

You Can Watch The Original Proud Family Series Now

While we wait for The Proud Family: Louder and Prouder to premiere, whenever that may be, you can catch and introduce your kids to the entire original series streaming now on Disney+.

More Like This
Exclusive: 'Firebuds' Dives Into Hanukkah Traditions In Festive New Episode
Surprise Your Kids With This Exclusive Sneak Peek At Mickey Saves Christmas
'The Princess Diaries 3' Is Actually, Really Happening
20 Heartwarming Episodes To Help Prepare Your Child For A New Sibling

This article was originally published on Feb. 26, 2021