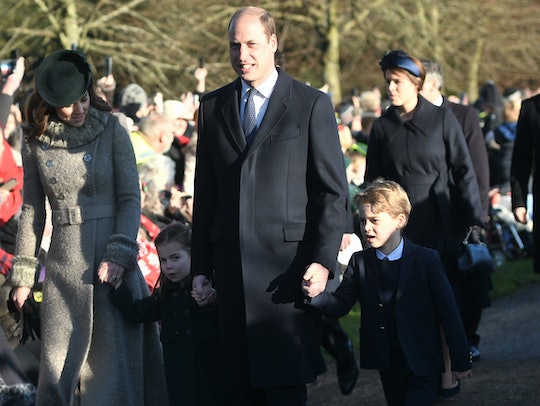 Even The Royal Family Is Changing Things Up This Christmas

It's going to be different for everyone.

The holidays look different for pretty much everyone this year. Even the royal family's Christmas traditions will see a big change after four decades of doing pretty much the same thing, yet another sign that 2020 has been the most bizarre year in living memory.

Ever since 1988, Queen Elizabeth and her husband Prince Philip have made the 100 mile journey from Buckingham Palace in London to their Sandringham Estate in Norfolk County. Most members of the royal family have joined them over the years, including the Duke and Duchess of Cambridge with their three children and even Prince Harry and Meghan Markle twice when they were still living in the United Kingdom. The family opens their Christmas presents, always homemade or something small, every Christmas Eve and then walks together for Christmas Day services at St. Mary Magdelene Church, greeting local royal watchers along the way. Even before the Christmas at Sandringham Estate gets underway, the family usually meets for a Christmas luncheon at Buckingham Palace the week beforehand.

Not this year, however.

As the United Kingdom continues to impose gathering restrictions to stop the spread of COVID-19, the 94-year-old Queen announced that she and 99-year-old Prince Philip would stay at their Windsor Estate alone, according to a statement released by a Buckingham Palace spokesperson, per TODAY: "Having considered all the appropriate advice, the Queen and the Duke of Edinburgh have decided that this year they will spend Christmas quietly in Windsor."

As for the rest of the royal family, it appears that Meghan Markle and Prince Harry are expected to stay at their home in Montecito, California, with their 19-month-old son Archie. (Especially now that they've found themselves a Christmas tree.) As for Kate Middleton and Prince William, they have yet to announce official plans for the holidays with their three little ones, 7-year-old Prince George, 5-year-old Princess Charlotte, and 2-year-old Prince Louis. But Carole Middleton, mom to the Duchess of Cambridge, recently shared a social media post saying she would be decorating Christmas trees with her grandkids via Zoom, so perhaps they won't be gathering together either.

While it will undoubtedly feel strange for the family to spend Christmas apart, they can catch up with video chats, of course, and perhaps even stand outside at a safe distance if possible.

The time apart will hopefully make Christmas 2021 all the sweeter for the royal family... and for everyone's families.