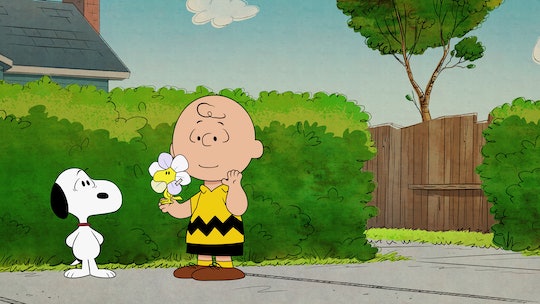 Good grief! Snoopy, Charlie Brown, and the gang are back.

Peanuts lovers, get excited and mark your calendars. A new show with Charlie Brown and the gang called The Snoopy Show is coming to Apple TV+ in February and here is everything you need to know before it airs. (Psst! The trailer has arrived and it's adorable.)

What Is It About?

Snoopy, obviously! The Snoopy Show is all about the beloved Peanuts dog and his feathered best friend, Woodstock. Together, the dynamic duo go on new adventures. According to Apple's synopsis, "Snoopy may seem like just a happy-dancin’, bone-lovin’, doghouse-sittin’ pup, but he’s much more than that. He’s Joe Cool: hippest kid in school. He's surfer king and famed arm wrestler Masked Marvel. He’s a World War I flying ace who battles the Red Baron. All of his bold, beloved personas are on full display in this brand-new animated comedy."

But don't worry, Snoopy's friends will make appearances too. You can expect to see other famous Peanuts characters like Linus, Lucy, Franklin, Schroeder, Peppermint Patty, and Charlie Brown, of course.

Apple released the first official trailer for The Snoopy Show on Jan. 25. In it, we see a young Charlie Brown meeting Snoopy as a puppy for the first time. "We're going to be best friends," he tells him as the dog jumps into his arms. But from this humble beginning comes one big adventure; the trailer then shows Snoopy riding a motorcycle, baking a cake, sledding down a mountain, and dancing with Charlie Brown and his pals. "Whoa, can you believe this dog?" Lucy asks.

When Does It Premiere?

You can start streaming The Snoopy Show on Feb. 5 only on Apple TV+. All six episodes will consist of three different cartoons featuring Snoopy and his friends, and will each be a little under 30 minutes.

You will need a subscription to stream The Snoopy Show. A monthly Apple TV+ subscription costs $4.99 a month after a free, seven day trial. If you've recently purchased an Apple device, or plan on purchasing one soon, you can get a year of Apple TV+ for free. Apple TV+ is not only available to stream on Apple devices, like your Apple TV, but is available on select Samsung, LG, Sony, and Vizio smart TVs, as well as Amazon Fire TV and Roku devices.

Once you have your Apple TV+ subscription, you can watch The Snoopy Show in addition to Apple TV+'s Peanuts collection, which includes the classic TV specials, like It's the Great Pumpkin Charlie Brown and Happy New Year, Charlie Brown!