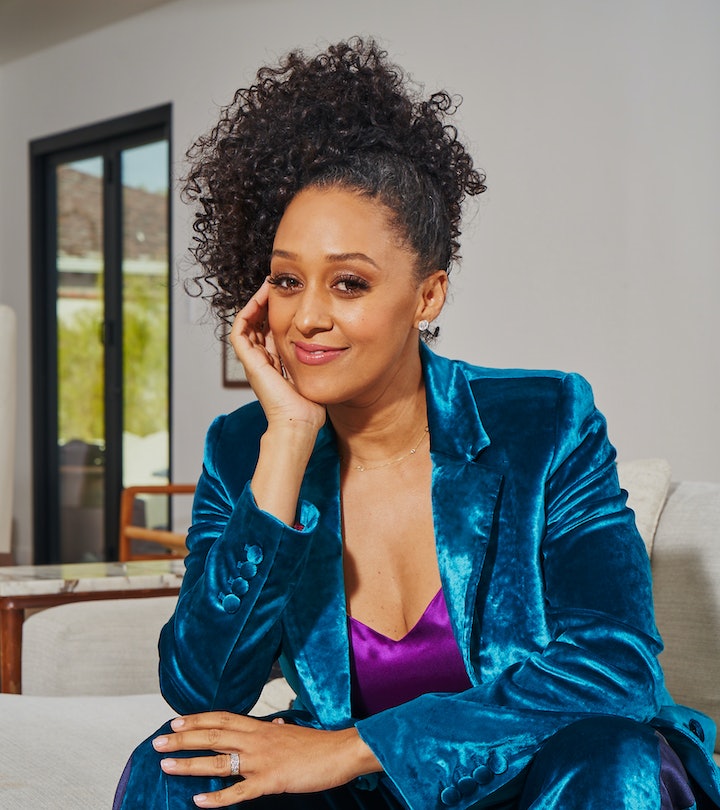 Tia Mowry Wanted More Diversity In Conversations On Wellness, So She Did Something About It

"I didn't see anyone that looks like me and I thought that was a shame."

After years of suffering from abdominal pains, it was a Black female gynecologist who finally listened to Tia Mowry-Hardict and diagnosed her with endometriosis in her 20s. "She knew right away," the 42-year-old actress tells Romper during a recent phone interview. "She was the first one to diagnose me. And she was also the first one to lead me in the right direction when it came to my treatments." That diagnosis, in turn, put her on a new wellness journey that ultimately helped her become a mom and an entrepreneur.

After noticing the lack of representation out there for Black women, Mowry-Hardict was inspired to start the multivitamin company Anser with BioSchwartz and United Talent Agency (UTA) in 2020. "I didn't see anyone that looks like me and I thought that was a shame," the co-founder says. "I wanted women of color, women of diversity, to be a part of the conversation and not be excluded from the conversation when it came to wellness."

Before starting Anser — a line of beauty supplements, prenatal care, as well as multivitamins for women, men, and kids — Mowry-Hardict had to start her own personal road to treatment following her diagnosis with endometriosis, a common and often painful disorder in which tissue grows outside the uterus. Approximately one in 10 women live with endometriosis, though Black women are less likely to get diagnosed and symptoms are sometimes dismissed as "bad periods," as Healthline explains.

Treatment plans for endometriosis vary, but for Mowry-Hardict, who also suffered from eczema, hers included surgery and adopting a different lifestyle. "I had to shift my focus and my perspective and say, ‘you know what, I have the power to take care of myself.’ And how I can do that is, turn to better foods," she says.

Mowry-Hardict says she also started taking supplements, something she had not previously considered. "I always thought that that was something that, you know, older people did," she admits. "I never looked at it as something for prevention. So, with that said, I really started to focus on my wellness journey — yoga, meditation, eating healthy, working out, and taking supplements."

Once she made those changes, Mowry-Hardict says she was able to become pregnant, ultimately becoming a mother to her 9-year-old son Cree and 2-year-old daughter Cairo.

In addition to Anser, Mowry-Hardict released a clean-eating cookbook entitled Whole New You in 2017. "This cookbook was really personal for me," she told BuzzFeed that same year. "As I started to make healthier choices in my own life, I saw things — like my endometriosis or my migraines — be put at bay. And that was amazing to me."

This past January, Anser celebrated its one-year-anniversary and, of course, healthy living remains a top priority in Mowry-Hardict's life. "I truly also believe that wellness is a priority, and not a privilege," she tells Romper. "Health is a priority, and it shouldn't be something that's not attainable to people. And so that has been my mission."

At the end of the day, while starring in Netflix's comedy series Family Reunion and running Anser, Mowry-Hardict is also a busy mom who juggles life as best she can. For her family, that includes feeding her two kids, with husband Cory Hardict, plenty of healthy and fun foods like oatmeal and cast iron pizza. She and Cairo, as she shared on Instagram, recently made "Kitty Pizza" made famous by the hit preschool show on Netflix, Gabby's Dollhouse. And like a lot of moms, Mowry-Hardict isn't opposed to a nice glass of red wine and face mask when "momma needs a break."

"Life is short," Mowry-Hardict says, "so we should try to make it the best."