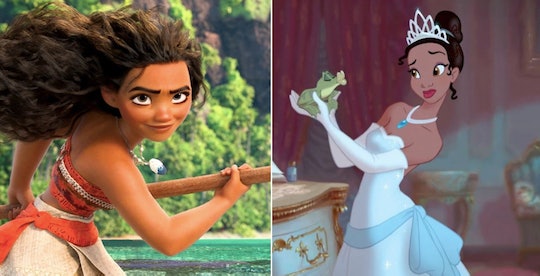 Disney recently announced some of the best news to come out of the bayou and south Pacific islands. That's right, Princess Tiana and Moana are getting series on Disney+ that explore their stories even further.

The Princess and the Frog character will soon be the star of a series titled Tiana, which will feature an original storyline and music. Actress Anika Noni Rose, who voiced Tiana in the original 2009 animated movie, confirmed the news on social media on Thursday. "Are y'all as excited as I am?!?!," the Jingle Jangle actress wrote on Instagram while sharing a post from Walt Disney Animation Studios. According to Disney, Tiana will premiere on Disney+ in 2022.

Moana of Motunui is also getting her own series on Disney's streaming platform. Simply called Moana, the series will be released on Disney+ in 2023 and will also feature original music. The animated show will continue to tell the the adventures of Moana's wayfinding skills that take her way beyond the reef.

Fans of both Disney princesses are excited to see more representation on the streaming platform, specifically of Disney's first African American princess. One fan tweeted a picture of herself and Rose with the caption, "My favorite princess is getting a series! I cried when they gave the announcement. I’m so excited that Tiana is getting more representation."

In addition to Moana and Tiana, Disney also shared a first look at its newest animated film, Encanto, which features music written by Hamilton's Lin-Manuel Miranda that will be released in the fall of 2021. According to The Hollywood Reporter, a long-form television series from Pixar called Win or Lose, created by Toy Story 4 story artists Carrie Hobson and Michael Yates, will also be headed to Disney+. Also in the works is a sequel series to Big Hero 6 called Baymax premiering in 2021, which will follow the robot as he looks for people who need care and help. Disney also got fans excited about Iwájú, a futuristic series slated for a 2022 premiere that's based on an African comic book about Lagos, Nigeria, and Black Panther 2's official release date — July 8, 2022.

As for Moana and Tiana, Disney fans will have to hang tight for their premieres as well. In the meantime, you can stream the movies on Disney+.

More Like This
Brandy Will Play Cinderella Again In The Disney+ Movie The Pocketwatch
Exclusive: 'Firebuds' Dives Into Hanukkah Traditions In Festive New Episode
Surprise Your Kids With This Exclusive Sneak Peek At Mickey Saves Christmas
How To Watch 'Rudolph The Red-Nosed Reindeer' This Holiday Season