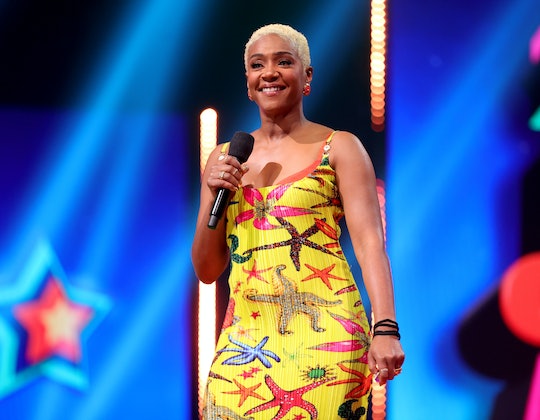 Tiffany Haddish Reveals She Wants To Adopt & How She’s Preparing

She’s a comedian, actress, author, and soon Tiffany Haddish may take on the role of mom. The Kids Say the Darndest Things host recently revealed that she’s interested in adopting a child and starting a family of her own. In fact, she’s already enrolled herself in parenting classes.

“I’m taking parent classes now to adopt,” 41-year-old Haddish said during an interview on E! News' Daily Pop show on May 3. Haddish also shared with Daily Pop co-host Justin Sylvester that she’s looking to provide a loving home to a child who is a little older and a little more independent. “I’m looking at, you know, 5 and up — really, like, 7,” she said. “I want them to be able to know how to use the restroom on their own and talk. I want them to know that I put in the work and I wanted them.”

While it’s clear that the comedian sees a child in her future, she joked that her chances of having a baby of her own are unlikely. “When I was 21, I was really hard up with money and gave up a bunch of eggs,” she told E! News. “So who knows? I might got some kids out in these streets. I doubt it though because I never got the bonus.”

This isn’t the first time Haddish, who is currently dating rapper Common (the couple confirmed their relationship last July), has talked about her desire to adopt. In fact, it seems the adoption bug has been on the “What Do You Say” rapper’s mind for a few months now.

During a November 2020 episode of Common’s Mind Power Mixtape podcast, Haddish shared her plans with him about adoption. “I just want to bring to them survival skills, share everything that I know with them,” she said at the time. “Between 6 and 10, get them right in there, because you can mold their mind. They’re still malleable in a lot of ways until they’re 21, that’s what I think.”

However, when it comes to the idea of getting a surrogate, Haddish said during the same Daily Pop interview that route is not for her. “I don't want to pay nobody to carry my baby neither because then I have to go through a process of giving myself injections and all that stuff,” she said.

However Haddish chooses to grow her family, she’s already shown that she is great with kids. When she won a Grammy for best comedy album, for instance, she encouraged her young co-stars on the set of Kids Say the Darndest Things to believe in themselves and was candid about how important the moment was to her. “It’s a lot of bumpy roads that you cross, right? And it’s a lot of times that you feel like, ‘Am I doing the right thing? Is this good enough? Am I good enough? Am I strong enough to do this job?’” Haddish told the kids. “And then you just have to believe in yourself as much as you can. Against all odds, you just say, ‘You know what? I’m going to just put my best foot forward, and I’m going to give the world the best that I got.’ Right? Anything is possible.”