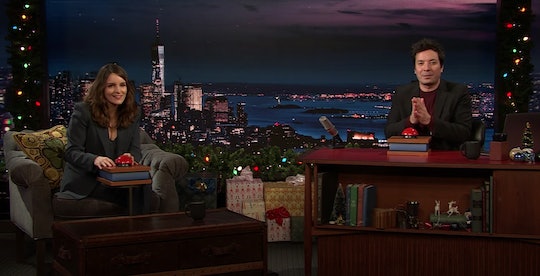 My money's on Tina.

After watching Toy Story, Finding Nemo, and other classics on repeat with your kids over the years, you might think you know Pixar movies like the back of your hand. But after watching Tina Fey and Jimmy Fallon take a Pixar quiz, you might second guess your expertise.

During Wednesday night's episode of The Tonight Show Starring Jimmy Fallon, both Fey and Fallon were challenged to the One-Second Pixar quiz. The Saturday Night Live alums were shown one second of a Pixar film and had to accurately guess the title of the movie. Given that both are the parents to two kids each and Fey stars in Pixar's newest film, Soul, one would expect this to not be too challenging.

And it really wasn't that hard for either of them. Both Fey and Fallon started out strong, correctly guessing the clips shown for Inside Out and The Incredibles. "My kids would have destroyed me if I didn't get The Incredibles," Fallon said after gaining the point. Relatable.

While they zoomed through the fast paced competition, they remained neck and neck for a good portion of the quiz. The only clip that stumped them was taken from Ratatouille and the tie breaker came down to a clip from Up. The entire quiz is worth playing along with at home, but just make sure that your victory dance is as good as Fey's every time she got a question right.

Ultimately, Fey was victorious and won over Fallon with an impressive 1,000 point lead. Luckily for Fallon, a clip from Soul wasn't included in the quiz, because she probably would have guessed that one correctly, too.

In Soul, Fey lends her voice to the character, 22 — a wayward soul who has never been convinced to go to earth. 22 ends up going on a journey during the film that can resonate with the audience members — whether they're One Second Pixar Quiz champions or looking for a heartwarming film to watch during the holidays. "I think the journey that 22 goes on is a great lesson for all of us that life is worth risking pain and embarrassment and suffering," Fey told ScreenRant. "It's worth it."

You, too, can get familiar with Soul when it premieres on Disney+ on Dec. 25.

More Like This
Exclusive: 'Firebuds' Dives Into Hanukkah Traditions In Festive New Episode
20 Heartwarming Episodes To Help Prepare Your Child For A New Sibling
All The Nights The Grinch Airs On TV In 2022
20 Of The Best Christmas Movies For Kids