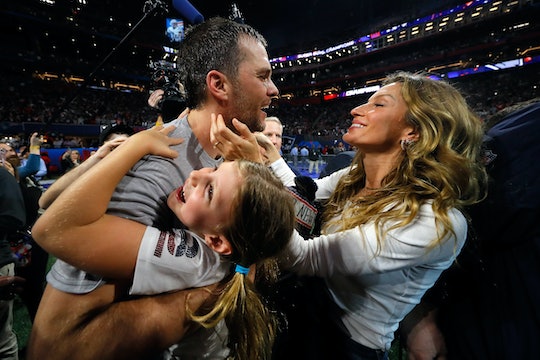 Every parent has their own cross to bear with their kids, some personal little peccadillo that has them worrying about the way they’re raising their family. A family history of a certain kind of illness, combating gender norms in the household, being so wealthy that you’re worried it will affect your kids. Oh wait, that last one doesn’t make sense? It does for Tom Brady, who said recently his extreme wealth is the “hardest thing” about parenting and raising his kids to be grounded.

The Tampa Bay Buccaneers quarterback has three children, 14-year-old son Jack who he co-parents with ex-girlfriend Bridget Moynahan, 12-year-old son Benjamin, and 9-year-old daughter Vivian. Brady, who has been married to model Gisele Bündchen since 2009, opened up about his life as a dad on Spotify’s Drive podcast recently. And when he was asked how he keeps his kids grounded, he said, “It’s probably the hardest thing for us as parents, you know, with myself and my wife.”

He went on to explain that all of this pampering has him reminding his kids that this is not the reality for most people. “And it's just, that's my kids' reality. Which is the hard part to say, ‘Guys, this is not the way reality really is.’”

Brady, who signed a 10-year contract with the NFL for $375 million, pointed out that both he and his wife grew up with humble beginnings, with him living in a middle-class home in California and her raised on a small farm in Brazil. This has them both thinking about how their privilege could affect their parenting, as he said on Drive.

“My dad worked his a** off for our family. My mom stayed at home, took care of us kids,” Brady added. “I saw my mom work every day to make food for us at night and, you know, wash our clothes and know they supported us by coming to all our games and you know, it was amazing, you know, and then I look at my life with my family and it’s so fast.”

“I know that I've screwed up a lot of things — that's the reality of being a parent,” Brady continued. “You just hope you can show them enough things to realize that when they are doing things that are selected for mom and dad to make our lives more convenient that that is a treat. You know, that is something that is not what every kid goes through. Probably one of the biggest challenges we have as parents.”

“Hey Tom good news! Because I am a kind, unselfish person I will take this problem off your hands. Check your DMs for my bank acct info. No thanks necessary just happy to help out a fellow struggling parent,” one person tweeted.

“Wow. Thoughts and Prayers Tom. We hope you get through this difficult time,” another sarcastically tweeted.

“Oh ffs. Hey @TomBrady tell your kids you are rich, they are not. I hope that eases the burden,” one tweet suggested.

Not everyone roasted the dad of three, however. A few people took to social media to point out that Brady was right to worry that being raised with privilege would affect his kids.

“Almost ALL parents should relate to Tom Brady's comments about his biggest parenting struggle... his wealth, even if we don't have $. How do we give our kids a better life than we had without making them soft, entitled, or weak?” wrote one Twitter user.

Brady himself has yet to respond to the backlash. Perhaps he has someone who can do it for him.