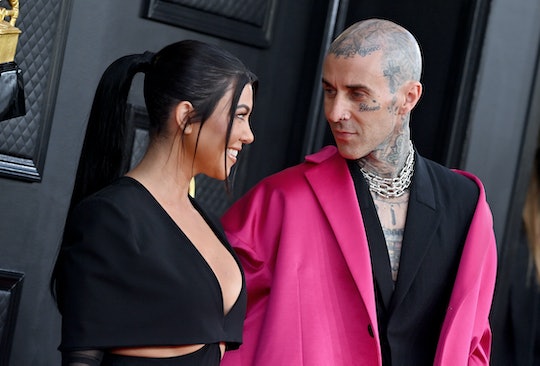 He asked Kris too.

Travis Barker and Kourtney Kardashian made headlines recently for their impromptu late-night wedding ceremony in Las Vegas, but their plans to get married are anything but impetuous. The Blink-182 drummer is actually a surprisingly traditional man and when it came time to propose to Kardashian, he went old school. In fact, Barker went to Kardashian’s father’s grave to ask his permission to marry his daughter, and it was an emotional moment for everyone involved.

Note: Spoilers for Episode 3 of The Kardashians are ahead.

During Thursday night’s episode of The Kardashians, Kris Jenner visited daughter Kim Kardashian before she was set to host Saturday Night Live to discuss Barker’s plans to propose to Kourtney. She explained that the dad of three had come to her to ask her permission to marry her daughter. “He asked for her hand in marriage, and I was like, literally, I want to cry now,” Kris told Kim. And she wasn’t the only parent he reached out to. “It was so sweet and so tender. And then he said he went to your dad's grave and asked your dad [for permission], and I just lost it.”

Rob Kardashian Sr. died in 2003 after battling esophageal cancer, and Kris couldn't help getting choked up about how meaningful it was to have him included in the happy event. “It's all happy, I just wish your dad was here to see it. I can hardly believe that it's the first time that she's getting married.”

Kourtney was in a long term relationship with ex-partner Scott Disick. While the pair continue to co-parent 12-year-old son Mason, 9-year-old daughter Penelope, and 7-year-old son Reign, they never married. So when Barker proposed to her on a beach covered in flowers and candles, it was an especially significant moment for the mom of three. A moment that was apparently put in jeopardy because of Kourtney’s visit to a fertility specialist for IVF treatments on the very same day Barker was planning to propose.

“He goes, 'Do you think she'll be able to come to Montecito on Sunday night?' I said, 'I don't know,’” Kris told daughter Khloé Kardashian during the episode of The Kardashians. “He has to do it on the 17th. That's the whole point of all of this, is that it's their anniversary, and this throws a whole wrench in [their plans]. He's beside himself.”

We all know, of course, that it worked out beautifully. They are engaged, and while they had a fun ceremony in Las Vegas to celebrate each other, they still plan to get married officially. With the blessing of Kris Jenner, of course. And Rob Kardashian Sr. too.