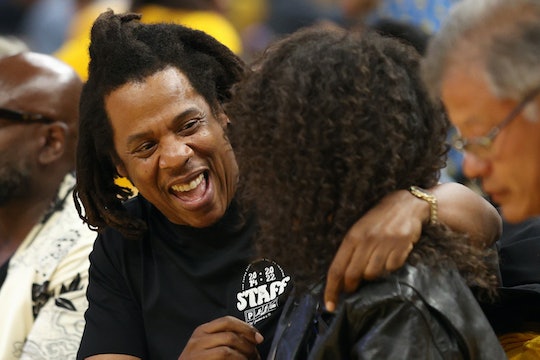 When you’re 10 years old, it doesn’t matter how cool your dad might seem to the rest of the world. They’re still embarrassing to you. Or at least, that’s the lesson we can all glean from Blue Ivy’s reaction to her dad hugging her at a rare appearance recently. Sure, the rest of us know JAY-Z as a pop culture icon and a music legend. But to his oldest daughter, he’s just another dad embarrassing her in public.

JAY-Z and his oldest daughter Blue Ivy Carter, who he shares with wife Beyoncé along with 5-year-old twin siblings Rumi and Sir, were hanging out court-side at game five of the NBA finals in San Francisco recently. Blue Ivy looked stylish and grown-up in a leather jacket, hoop earrings, Nike sneakers and a “Brown Skin Girl” t-shirt from her and her mom’s Grammy-winning song. Or she was trying to look grown up, at least. That is, until her dad JAY-Z, realizing they were on the jumbotron during the game, threw his arm around his daughter and kissed her on the cheek.

The video of Blue Ivy shrugging off that hug and trying not to smile has naturally gone viral, with JAY-Z looking like the proudest dad in the world as his daughter pushed on his arm and seemed to say “Dad, my hair!”

Blue’s very on brand reaction to her dad didn’t go unnoticed by the music mogul, who laughed and leaned in to the dad vibe by kissing her on the cheek for extra effect. Naturally everyone loved it. “Jay-Z has reached embarrassing Dad level with Blue Ivy,” noted one social media user, while others couldn’t get over how much Blue Ivy looked like her mom, “I know Blue Ivy is Beyoncé daughter but I mean guys look at her that's BEYONCÉ HERSELF.”

While Blue Ivy was acting pretty cool with her dad, she apparently wasn’t too cool to get excited about meeting Steph Curry after the game. “Her and JAY-Z were by the locker rooms after the game,” an eyewitness told E!. “She was so excited to meet Steph. He shook her hand and hugged Jay.”

Blue Ivy’s night out with her dad really runs the full scope of peak 10-year-old behavior. Trying to look cool around her dad but dropping the act when she meets a celebrity. And apparently forgetting her dad is one of the biggest celebrities around.