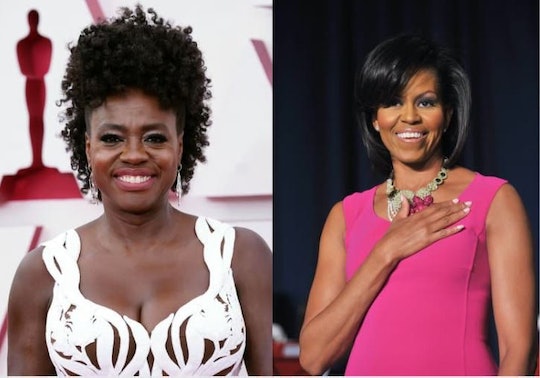 “It was terrifying but an incredible honor to portray this extraordinary woman.”

Academy Award-winning actress Viola Davis is about to debut her most regal role yet. Davis will portray Michelle Obama in Showtime’s upcoming new series, The First Lady and based on a first look, it’s clear she was the perfect choice for the role.

Earlier this week, Entertainment Weekly shared the first look of Davis as former, forever First Lady Michelle Obama and the actress literally embodies her whole face down to the smirk. The limited series will focus on the personal and political lives of presidents Barack Obama, Harrison Ford, Franklin Roosevelt, and the first ladies beside them.

Before signing on to be part of the series, Davis, who is also an executive producer, told Entertainment Weekly that she spoke with Mrs. Obama and read her memoir, Becoming. “It was terrifying but an incredible honor to portray this extraordinary woman,” the 56-year-old Tony-award-winning actress tweeted a picture of herself and The Handmaid's Tale star, O-T Fagbenle, who portrays President Obama.

The Crown’s Gillian Anderson will play Eleanor Roosevelt, who served as the first lady of the United States from 1933-1945, making her the longest-tenured first lady in American history so far. Michelle Pfeiffer will take on the role of Betty Ford with Dakota Fanning as the first daughter Susan Ford and Aaron Eckhart as President Gerald Ford.

Davis told Variety that while preparing for the role, the Becoming author did not give her any pointers on how to portray her and insisted that the Fences actress call her Michelle. “She’s everything...she’s a goddess,” she told Variety earlier this year. “I probably would cringe if I said that but I'm gonna say it anyway. I love her beyond love.”

Beyond the respective talents, the women also have the #girlmom title in common. Davis is the mother of 11-year-old Genesis Tennon, and of course, Mrs. Obama, is the mother of former First Daughters, Sasha, 20, and Malia, 23.

An official release date for The First Lady has not been released yet, but the series is set to premiere on Showtime in the spring of 2022.