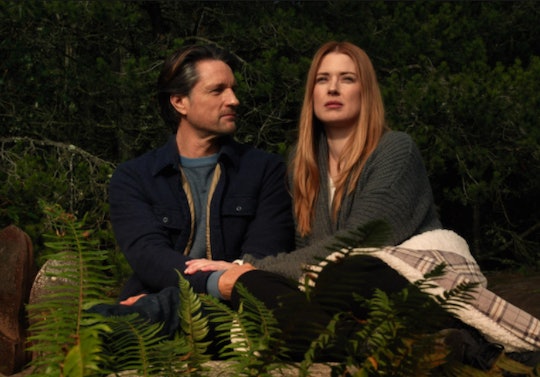 There are more than 300 amazing songs played throughout the first four seasons of Netflix’s hit drama.

Virgin River on Netflix really gives you that sensory overload sensation. It doesn’t just look good, it sounds good (and probably smells good but technology has not yet gotten us to a place where we can smell our programs). Why does it sound so good, you ask? Season after season of solidly curated soundtracks that feature a good blend of folk and pop and even one original song called “Hope and the Gals” which needs to become an anthem for a certain kind of ladies’ night. Here’s everything you need to know about the beloved drama’s music.

There are more than 300 amazing songs played throughout four seasons of Virgin River, and we’ve picked out some of the best for you to check out. You can enjoy the entire Virgin River soundtrack on Spotify here.

Introducing the perfect theme song in Season 1 of Virgin River.

When Netflix first introduced Virgin River in 2019, the first thing to really hit our ears was that theme song. It set the tone for the show perfectly. The theme song by Jeff Garber calls to mind Jack’s Bar, fly-fishing, Mel’s log cabin, Hope’s ever-changing wardrobe of cozy sweaters. All of that without a single word sung. The rest of the set list on the Season 1 soundtrack for Virgin River feature lesser-known folk and pop artists like Allie Moss singing “Already Down,” Sonny Cleveland’s “Bring It On Back,” and even a version of “Make You Feel My Love” by JJ Heller. All gorgeous, evocative songs.

Check out Spotify for the entire soundtrack for Season 1 of Virgin River.

The playlist for Season 2 of Virgin River really creates the perfect backdrop for Mel as she adjusts to her new life in a small town. There’s a cover of “Landslide” by Haley Klinkhammer that will blow your mind, and this time around there’s even a live performance on the series by indie-rock group The Promised. Big names like Lizzo, Aretha Franklin, and Hozier make appearances on the Season 2 soundtrack alongside some singer-songwriter originals that are perfect for cozying up by the fire.

Season 3 has some more hopeful tunes.

Perhaps spearheaded by the cover of “Three Little Birds” by Dressage x AG, the soundtrack for the third season of Virgin River features more singer-songwriter originals and chill covers, but this time around there’s something a bit more hopeful about the soundtrack. Mel is settling in, life in Virgin River is coming together to an extent. Songs like Rag’n’Bone Man’s “Human,” Josh Eagle’s “Dance Like You Wanna,” and “Conquer This Sweetheart” by Cree Rider Family Band make for another solid playlist.

By the time Virgin River released its fourth season, fans knew to expect an incredible playlist alongside the show they’ve come to know and love. Harry Styles singing “Adore You,” while the Lumineers’ “Salt and the Sea” and a cover of their seminal hit “Ho Hey” are featured on this playlist, alongside emotional songs like “I’m Not Ready To Say Goodbye” by Margot Todd and “Love You Like I Do” by Vancouver Sleep Clinic. For a little extra fun, there’s also Frankie Valli’s “Can’t Take My Eyes Off Of You” thrown into the mix.

What will the Season 5 soundtrack sound like? Whatever it might be, we know we’ll be listening. Again and again.

More Like This
'Virgin River' Has Wrapped Filming Season 5 & OMG Is Charmaine Still Pregnant!?
'Wednesday' Creators Say They're "Talking Amongst Ourselves About Season 2
'Workin' Moms' Has An Official Release Date For Its Final Season
Eric & Donna's Daughter Will Ruffle Red & Kitty's Feathers In 'That '90s Show'