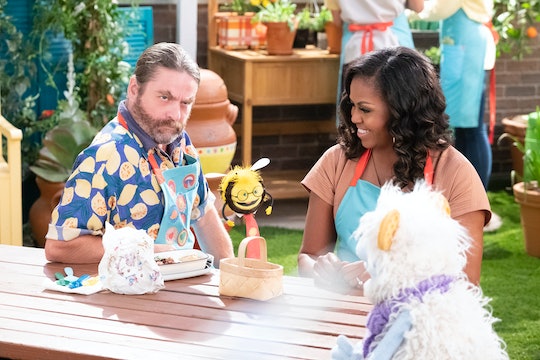 The show delivers consistent, positive, and socially conscious messages in bounds, bubbling over with one delightful surprise after another for kids and their grown-ups alike.

Netflix’s new series Waffles + Mochi was initially created with the expressed goal of making food fun for kids; what it accomplishes is far more extraordinary. A collaboration with A Higher Ground Productions featuring Michelle Obama, the show lifts up diverse voices and offers young viewers a glimpse of the vast world in a way that is both intimate and full of joy during a time when we need it most.

Lovable puppet best friends Waffles, a creature of half frozen waffle and half yeti heritage, and Mochi, who later uncovers his rice and dairy roots, lived in the land of frozen food where ice cubes were the only available cooking ingredients. The two depart their frosty homeland in a quest to become chefs and arrive at Mrs. Obama’s grocery store, which becomes their home base from which they set off on a series of global ingredient exploration missions, making many new friends along the way.

By contrast, the real world is a scary place right now. Throughout the pandemic, confined to and isolated in our homes, we’ve experienced our lives getting smaller. All Americans have been forced to confront the pervasive ugliness in the cruelty of racism that exists in our society, documented again and again in the killings that have heightened the Black Lives Matter movement. Asian Americans have endured becoming scapegoats for the pandemic with an increase in hate crimes spurred by racist rhetoric from our own government leaders. And, Black, Indigenous, and People of Color communities have been disproportionately affected by Covid-19, from far higher contraction and mortality rates, to bearing the brunt of pandemic-related economic, educational, and social fall-out.

Our children absorb our anxieties and fears. What America needs now is unity, hope, and joy – and lots of it. We need reminders and encouragement that we can overcome the too often overwhelming brokenness of society.

At this moment, I look over at my musical, mixed-race kiddo and find that he is utterly spellbound.

“You can do nothing or you can start cooking,” José Andrés, chef and Nobel Peace Prize nominated philanthropist behind the disaster relief nonprofit, World Central Kitchen, tells Waffles and Mochi in the final episode as he teaches them how to make the stew he served hurricane victims in Puerto Rico.

The show delivers consistent, positive, and socially conscious messages in bounds, bubbling over with one delightful surprise after another for kids and their grown-ups alike. Co-stars and guests like Zach Galifianakis, Lyric Lewis, Rashida Jones, Common, Jack Black, and many more, lend their passion in what is clearly a project of love. My 7-year-old son and I chuckled harmoniously through most of the charmingly punny jokes, our viewing punctuated by uncontrollable stitches of laughter. Each episode spotlights an ingredient widely used across the globe. I especially loved learning about potatoes (my fav) while kiddo was ecstatic over the episode on pickles, which he can’t live without.

In the first episode, a tomato in a black and white wig, voiced by Sia, sings about how they don’t belong in a category merely as a fruit or a vegetable. Waffles and Mochi learn that tomatoes can be both and that they, like people, belong everywhere. At this moment, I look over at my musical, mixed-race kiddo and find that he is utterly spellbound.

With each new destination, our world expanded and we indulged in dreams of faraway family vacations when the world is safer again.

The show excels at joy and presenting an unwavering message of unity; it’s a celebration of what humanity has in common, humorous and lighthearted — never heavy-handed. Kiddo and I followed the antics of Waffles and Mochi as they traveled from Samin Norsat’s garden in California to the breathtaking Maras Salt Ponds of Peru, then on to a kimchi-making convention in South Korea, Massimo Bottura’s tortellini kitchen in Italy, and a family home in Uganda. With each new destination, our world expanded and we indulged in dreams of faraway family vacations when the world is safer again.

One Waffles + Mochi episode features a miso expert in Japan, demonstrating his craft as a family affair. His adorable children giggle while reaching over one another in a warm frenzy to mix and form ingredients of soybeans and salt, licking their fingers as they go. The intimacy and bliss of the moment is beyond touching.

And the exclusive Waffles + Mochi clip shared with Romper below takes us to the kitchen of a Japanese chef who is teaching his small child to make his signature onigiri, a simple and delicious popular rice ball dish. “Just like my mother made it for me, I make it for Kan-chan,” says the father.

When they finish, the little boy exclaims matter-of-factly that his onigiri tastes best while his father beams. This scene is reminiscent of all the times I’ve watched my own child roll out dough with his grandma, bake salted chocolate chip cookies with his dad, or make fried rice with me. I feel a connectedness in the awareness that similar tender scenes have played out countless times in home kitchens the world over. No matter where we are from, or the color of our skin, all of us want our children to be nourished, happy, and thriving.

If all this wasn’t reason enough to love Waffles + Mochi, a campaign inspired by the show called Pass the Love has been launched in collaboration with Partnership for a Healthier America to provide over a million meals for families in need.

I can’t recall a show I feel better about watching with my child. Get ready to “Listen to your vegetables and eat your parents!”

This article was originally published on March 12, 2021