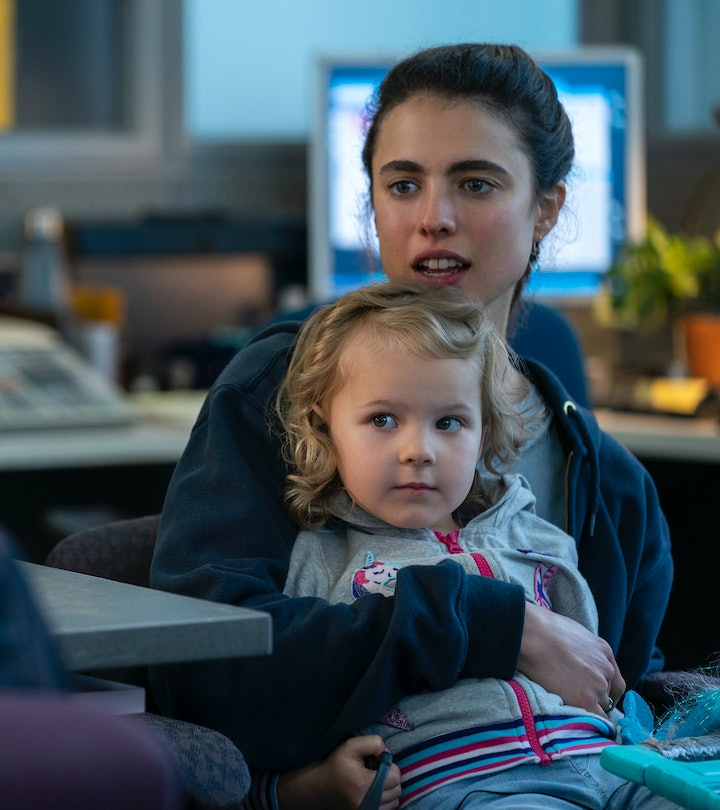 Most of us don’t get the payoff. Most of us stay in that one place we all said we would escape someday.

I couldn’t breathe watching Maid. It brought it all back. The middle-of-the-night leaving, the poverty, the heavy weight of wanting. I wanted to turn it off and remind myself I could exhale — I know it all turns out okay for her in the end.

Except what about when it doesn’t? Imagine watching Maid on Netflix, and it is you without the pay-off. Imagine you are a writer, a single mom, and always broke. Always getting by working a job that has you serving people who have more. Except you don’t make it work. You don’t get the happy ending that makes the rest of the story palatable.

I think a lot about this shirt I used to wear, a brown ringer tee I found on sale at Old Navy — the words “Just A Waitress Until I’m Discovered” written in neapolitan ice cream colors across the chest. I wore it to my job as a waitress at a restaurant called Joe Tomato’s before changing into my tomato-colored uniform shirt to serve panzerotti and half-priced chicken wings and pitchers of beer. I wore it home at the end of my late-night shift to four boys, sometimes asleep on the couch and sometimes in their beds and always in a house that was a mess. I would stand in the kitchen at one in the morning in that t-shirt and know I had hours to go until sleep. The teenage babysitter bored and ready to leave and once or twice smelling like weed with the television volume turned too high.

I believed that t-shirt always. I believed I was going to be discovered. I believed it years before I bought it as a 30-year-old single mom of four. I was always a waitress and sometimes a bartender, even back when I was a mom of one. I wasn’t really a waitress though. This is what I knew and the t-shirt knew too. I was a writer.

We were starring in a movie but it turns out it was a movie no one wanted to watch.

I wanted to be a writer always. Stephanie Land also wanted to be a writer always; this was her true north star when she was a young single mom. When she wrote Maid she wrote about being a writer always and I felt this so deep. In high school I was “good” but everyone says this so I don’t know if it was true anymore. I learned easily then, believed I would go to university. I was a little Rory Gilmore before there was a Rory Gilmore, visiting every campus. Ordering every school catalogue by mail. Meetings with my guidance counsellors on Wednesday afternoon once a month. The stillness that came to me when I wrote and it felt right. That silence. It was all I wanted.

Now is my time, I thought. Now is our time to become.

I applied to university as a mature student. I applied for family residence. I did the mom math and figured my boys would start school when I finished.

I forgot I would still need money to feed them. That the university would not pay for food or shoes or jeans or Halloween costumes. That the loans I would be eligible for would never be enough. That I would sink and sink deeper into the person I was turning out to be. A big question mark that might never be answered.

Instead I met another boy and this one I married. And this one wrecked us. He doesn’t get this part of the story though.

Maybe I can just tell you this: I had two more sons in four short years and then I left him. The man who never hit me but oh how much he wanted to. His loose fists at his sides while he screamed, itching so hard to be clenched. I left with no money. You are thinking “no money” but you don’t know. You can’t know.

I wanted all the time. I think about our walks to the corner store on my nights off, their happy chatter as I peeked in the windows of better, stronger families, and all of my wanting.

That t-shirt though. It was my gift to me. I looked so bad in it. The hem wasn’t long enough to cover my hips. But I believed it so much I wore it always. I believed I was going to get discovered like I was some malt shop bobby soxer from a ‘50s movie. I was going to be a writer and all of this was just fodder for my someday story. And I could paint myself as the victim even though there were some days I was the villain.

The truth was I was rotting on the inside with all of my self pity. I wanted to be precious about writing. I wanted to sit in a classroom and talk about literature instead of standing at a table upselling sides of gravy.

I wanted all the time. I think about our walks to the corner store on my nights off, their happy chatter as I peeked in the windows of better, stronger families, and all of my wanting. Oh my god the wanting. Blue-and-white checked curtains. Little night lights. Crock pot stews, a clean white fridge. The safe home I would give them.

The safe home I never gave them. My t-shirt was a goddamn liar.

I did eventually write a book, only by then, my boys had all graduated from high school. I wrote about us. I wrote about me and us and laundromats and saving my pennies to go to Europe like that would make it all better. Like if I stuck the landing it would change our story. It’s like I wrote our book from the top of a roller coaster with the boys strapped in beside me but I was the only one who made it to the bottom. The ticker tape parade never happened for my little boys. It’s too late, their childhood stories are finished.

I didn’t pull it off for them. My boys grew up and I didn’t give them everything I wanted.

Most of us don’t get the payoff. Most of us stay in that one place we all said we would escape someday. Most of us never get past “before” for so many reasons. We have more than one kid. We don’t get child support. We are treading just enough water to get from week to week and we cannot see past next week and so we stop trying.

Most of us don’t get discovered. But we find a way to be happy because what else is there to do?

“Our house always felt really light to me.” This is what my son told me on a drive this weekend. He is tall and strong and happy. “We were always doing something fun every day.” He remembers the park, the beach, the nights watching movies on the sofa. He does not remember my wanting and wanting.

More Like This
How Do I Rediscover My Sexuality When I’m Completely Touched Out?
OB-GYNs On How The End Of Roe Changes How They Can Care For Us
I Found Gender Euphoria In My Second Pregnancy
Jenny Slate Played Our Parenting Edition Of Never Have I Ever & Here’s What We Learned