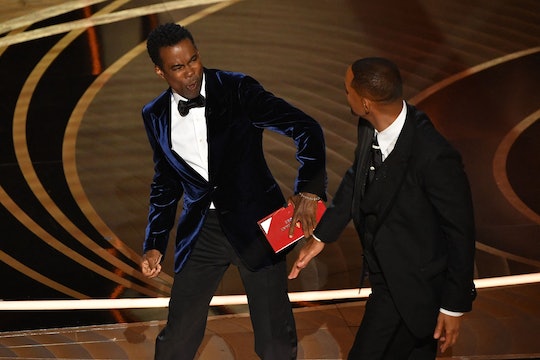 The smack was not staged.

Was it a joke? Was it an elaborate Oscars set-up to set Twitter ablaze? Did... did we just see Will Smith smack Chris Rock in the face for making a joke about his wife and then unleash a string of profanities that can still be seen from space?

Whether it was a joke or not, what everyone saw was real during the 2022 Academy Awards. While coming out to read the nominations for Best Documentary, Rock made a joke about Jada Pinkett Smith’s bald hairstyle, telling her he couldn’t wait to see G.I. Jane 2. Pinkett Smith rolled her eyes, and Smith jumped right up, stormed up on the stage, and proceeded to slap Rock across the face.

The slap looked fake at first, and Rock seemed to laugh as Smith approached him, but as Smith went back to his seat, the live feed for the Oscars seemed to pause and go mute for a few moments, before you could spot Smith screaming something back at Rock from his seat. To many on Twitter, it looked like he was screaming, “Keep my wife’s name out of your f*cking mouth!” Twice.

Rock tries to make a joke again about how this is the best Oscars ever and continues with the award, but it was clearly super uncomfortable in the room.

Many on Twitter pointed out that Pinkett Smith has been very open about her battles with alopecia — a disease that causes hair loss — and that might be why the joke wasn’t very funny to her or Smith. It feels more clear with the unedited version that what happened on stage wasn’t supposed to happen. Directly after the award, P. Diddy came out and tried to clear the air by suggesting Rock and Smith settle that dispute at the after-party like a family, and Smith and Pinkett Smith gave a laugh. But who knows how Rock was really feeling about it all, or if everybody was ready to just move past it and pretend it didn’t happen. Either way: yikes.

Smith went on to win the Best Actor award for King Richard, and in his (very long) speech, he went on about how Richard Williams was a man who wanted to protect his family and he felt the same. He did apologize to the Academy and to those there watching and his fellow nominees (but he did not apologize specifically to Rock, it must be said), and then went on to thank his mother and family through tears. His speech also mentioned how he wanted to be a vessel of love before making a joke about hoping the Academy asks him back.

He went on to get a standing ovation, which feels a little strange considering what had just happened on stage, but I guess a win is a win, especially after such an impressive career. Maybe he’ll apologize to Rock in private?