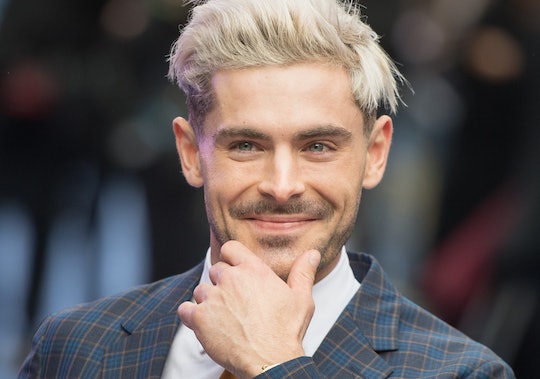 Who’s ready for Zac Efron to become a dad? Not him, he’s definitely not ready. Or so it seemed when he was asked about fatherhood in an interview with Ellen DeGeneres. The two were discussing his very first onscreen dad role in the remake of Stephen King’s Firestarter, and the High School Musical actor made his feelings abundantly clear. In fact, he essentially boiled down his feelings into one word. “Oof.”

Speaking with DeGeneres, Efron opened up about his experience playing a dad of a 10-year-old daughter (Ryan Kiera Armstrong) in Firestarter, which comes out in theaters on May 13. “I didn't think about it all that much,” he said of playing a dad for the first time with no real life experience. “And then when we started filming the movie, I had a two-week quarantine, and when I got out of quarantine, we started filming that Monday, so it was a pretty quick intro to the film, and all of a sudden, I had this daughter in front of me. We had a pretty heavy dad-daughter scene right off the bat, and I realized I was drastically underprepared for this part. I didn't know what I was doing.”

The two went on to form “the best bond” after two days because “luckily, Ryan is just so sweet, she’s just the coolest.”

Did that sweet bond make him want to have kids of his own, DeGeneres (and everyone else) wanted to know?

“Oof,” Efron said when she asked, before stumbling over his words as the audience laughed. “It’s, ah, you know what? I think that was a healthy dose to put me off it for as long as necessary. I have a little bit more growing to do, probably.”

It bears noting that Efron’s mom was in the audience laughing herself when her son said, “I don’t know what to say now.” He added that he has a “healthy respect for parents, very grateful for them all,” before giving his own mom a shout out by saying, “I love you so much, mom.”

Now she knows she won’t be getting grandkids any time soon.

Efron appears to be currently single, according Us Weekly, so perhaps it’s not the best time to consider fatherhood. But his movie choices do beg the question; are you sure you don’t want to be a dad? He’s been slated to star in another classic remake, Three Men and a Baby, and of course there’s Firestarter. Maybe he’s just trying on the dad role until the real thing comes along. Which is fine by us.

More Like This
Why Prince Harry Feels Lucky To Be A "Father With A Platform"
Kate Middleton Explains Why Her Kids Couldn't Attend The Top Gun: Maverick Premiere
Chris Pratt & Katherine Schwarzenegger Welcomed A Baby Girl With The Prettiest Name
Post Malone Revealed "The Most Important" Quality He Wants To Bring As A Father