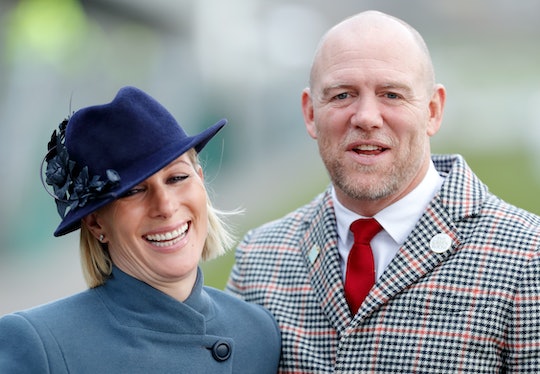 “We wouldn’t have got to the hospital on time.”

Queen Elizabeth’s tenth great-grandchild was born at home and on the bathroom floor. Yes, as her husband Mike Tindall announced on a recent episode of his podcast The Good, The Bad, & The Rugby, Zara Tindall gave birth to a baby boy and made a grand debut. Now there’s a royal who knows how to make an entrance.

In Monday’s episode of his podcast, Mike shared that the couple was at home on Sunday night with a friend when Zara went into labor. Quickly. So quickly, in fact, the couple’s friend realized there would not be time to get her to the hospital, according to the new dad. “So it was running to the gym, get a mat, get into the bathroom, get a mat on the floor, towels down,” he said.

Mike went on to say that they were not alone in their bathroom birthing situation, thank goodness. “Fortunately, the midwife, who was going to meet us at the hospital wasn't that far away," he explained. "So she drove up, got there just as we'd assumed the [position]. And then the second midwife arrived just after the head had arrived."

Queen Elizabeth and the Duke of Edinburgh shared that they’re “delighted” about their tenth great-grandchild’s birth. “The Queen and The Duke of Edinburgh are delighted with the news and look forward to meeting their 10th Great Grandchild when circumstances allow,” a Buckingham Palace spokesperson said on their behalf. Lucas was reportedly named after his great-grandfather with the middle name Philip.

Zara, who is the daughter of Princess Anne, now shares something of a special bond with her grandmother. Lucas is the first royal baby to be born at home since the birth of Queen Elizabeth’s youngest son, Prince Edward, 57 years ago, who was born at Buckingham Palace. Although not on the bathroom floor, of course, so young Lucas Philip Tindall owns that distinction all on his own.

Lucas is the second royal baby to be born in 2021; Princess Eugenie, cousin to Zara Tindall, welcomed her son August Philip Hawke Brooksbank, another young namesake for the Duke of Edinburgh, in February with her husband Jack Brooksbank. Between his sisters and his royal cousins, Lucas will have playmates aplenty.