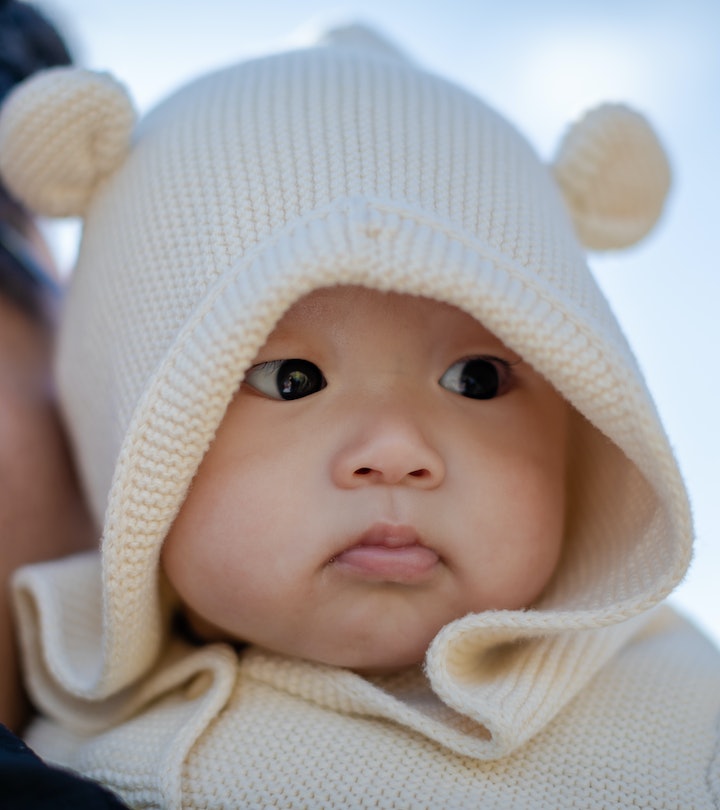 5 Signs Your Baby Is Too Cold

Because they can’t yell at you to turn the AC off.

One of the hardest things about being a new parent is learning your baby's cues. Since they’re unable to fend for themselves or shout things like, “Mother! It’s freezing in here,” it's crucial parents learn signs of hunger, tiredness, sickness, temperature, and more.

Babies don't have the ability to self-regulate their temperatures like adults, according to InfantCPR. Their bodies lose heat through unprotected surfaces, such as their head, hands, or feet — which is called "radiated heat," according to Mayo Clinic. Dr. Daniel Ganjian, a pediatrician at Providence Saint John’s Health Center in Santa Monica, California, tells Romper that a baby’s ability to regulate their own body temperature gets better as they get older, and usually between 3 and 4 years old. “Nonetheless, even at older ages, kids still need reminders to dress well before going outside. Even teenagers need reminders. Temperature self-regulation is not perfect and must always be accompanied by proper clothing,” he says.

Similarly, if babies don't have enough layers on or are in a very cold room, being too cold and, in rare cases, experiencing hypothermia are real threats. Even in warmer months, it's important to monitor your baby's temperature to make sure they're warm enough, especially indoors. In the colder months, you'll need to keep an eye on their temperature outside as well as indoors.

In fact, there’s even an optimal baby room temperature (regardless of how cold or hot it is outside). Dr. Gina Posner, board-certified pediatrician at MemorialCare Orange Coast Medical Center in Fountain Valley, California, says, “I usually tell people to keep their house around 72 degrees. But, some kids run warmer or colder than others, so if at 72, your baby feels too hot and they are in only a diaper, then cool it down. If they feel too cold at 72, then give them an extra layer of clothing and check again.”

Obviously, appropriate pajamas, swaddles, and blankets (if your baby is old enough), can be used to help regulate their temperature as well. “Remember, the temperature on the thermostat in the hallway does not always match the temperature in the bedrooms,” Ganjian says.

As overwhelming as it may sound to have to learn all of your baby's cues, soon they'll become second nature. And once you do, regulating your child's temperature will be simple.

More Like This
Should You Swaddle Your Baby In The Summer? Here’s How To Dress Them
How To Breastfeed A Baby With A Cleft Lip Or Cleft Palate
Should Parents Consider Delaying Covid Vaccines Until Closer To School Starting?
The Covid Vaccine For Kids Under 5 Has Been Sent To The FDA For Review

This article was originally published on Oct. 21, 2016