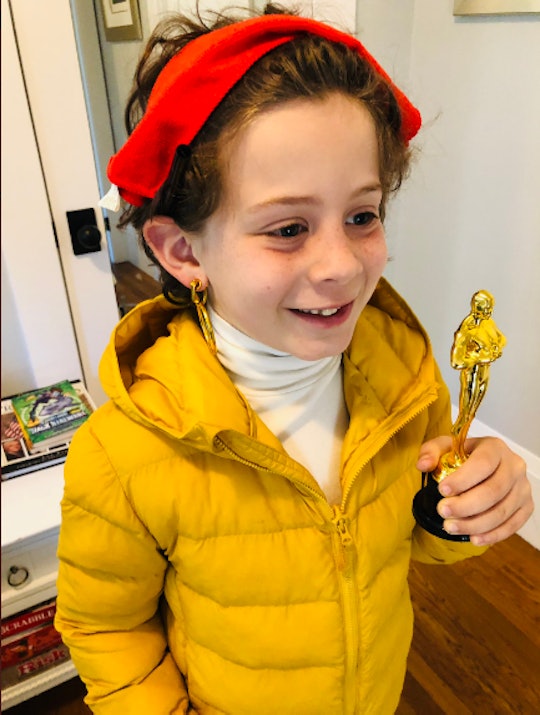 The youth poet laureate herself loved it.

When Kimberly Rowan’s son Jeremy was tasked with dressing up as his idol for Spirit Day in his Zoom class, the 7-year-old decided his would be Amanda Gorman after seeing her perform her incredible poetry at President Joe Biden’s inauguration. The little boy has managed to charm the entire internet with his chosen idol, not to mention Gorman herself.

Jeremy Rowan became interested in learning more about Gorman after watching her perform her poem — “The Hill We Climb” — at the inauguration of President Biden and Vice President Kamala Harris. “The more he learned about her the more excited he became,” Rowan tells Romper of her son.

After he did more research, Rowan says Jeremy just knew he wanted to dress as Gorman when his school had a virtual “dress as your idol” day. “He told me he was going to dress as Amanda,” Rowan says. “He searched around the house for the right accessories and was excited to share with his peers.”

Jeremy found a bright yellow coat, a piece of red fabric to put in his hair, big hoop earrings, and even held a little gold statue that looked like an Academy Award. Rowan shared the photo of her grinning son dressed as Amanda Gorman on Twitter, which has gone viral with over 33,000 retweets. “This little guy chose to dress as Amanda Gorman for ‘Dress as Your Idol’ day at (remote) school,” Rowan tweeted. “Thank you @TheAmandaGorman for inspiring all of our children to change the world!”

Rowan tells Romper that the other kids in Jeremy’s class “dressed as celebrities, athletes, political figures, and other notable leaders” and her son “was the only one to dress as a poet.” Still, she says, “His classmates recognized him as Amanda right away.”

Twitter loved Jeremy’s Amanda Gorman-inspired outfit. “This boy’s choice makes my eyes tear with happiness,” one Twitter user wrote. “What a sweet, wise child.” Another social media user wrote, “Brave, awesome kid. I hope he is growing up in a community where he can dress up like someone he admires without worrying about their gender. We need more kids like him to break the ugliness in this world.”

Perhaps the best reaction came from America’s first youth poet laureate herself, who shared Jeremy’s photo and along with a sweet message to her young super fan. “When I dress up as my idol I have to dress up as him!” Gorman tweeted.

Amanda Gorman shared a photo of a boy dressed as her.

Rowan says that she and her son were “beyond amazed at Amanda's response” and that Jeremy was “over the moon” by the attention his outfit has gotten. And, according to Rowan, the fact that Gorman took the time to retweet Jeremy’s photo “is reaffirming on what a leader she is.”