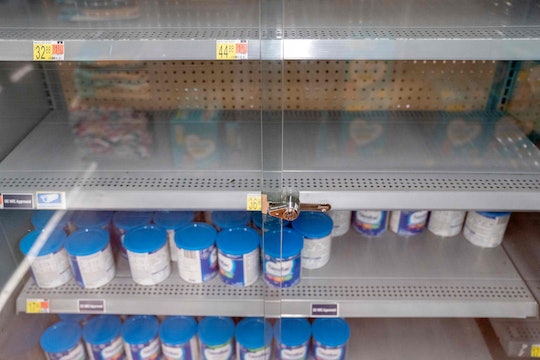 “The Biden Administration is happy to provide baby formula to illegal immigrants.”

Texas Gov. Greg Abbott admonished President Joe Biden and his administration for providing infant formula to babies of “illegal immigrants” amid the ongoing shortage as he and National Border Patrol Council (NBPC) President Brandon Judd believe that the children of Texas should come first.

“Children are our most vulnerable, precious Texans and deserve to be put first,” a joint statement from Abbott and Judd released on Thursday read. “Yet, President Biden has turned a blind eye to parents across America who are facing the nightmare of a nationwide baby formula shortage. While mothers and fathers stare at empty grocery store shelves in a panic, the Biden Administration is happy to provide baby formula to illegal immigrants coming across our southern border.”

“This is yet another one in a long line of reckless, out-of-touch priorities from the Biden Administration when it comes to securing our border and protecting Americans,” the statement continued. “Our children deserve a president who puts their needs and survival first — not one who gives critical supplies to illegal immigrants before the very people he took an oath to serve.”

This statement appears to have been spurred on by several GOP lawmakers who criticized the Biden administration for providing infant formula to undocumented infants, including Republican Florida Rep. Kat Cammack, who claimed in a Facebook Live video on Wednesday that a Texas border control guard told her he had “taken in pallets of baby formula for all of the illegals that are crossing into the United States.”

Cammack’s claim has not been verified by the U.S. Customs and Border Protection (CBP) and the White House has not responded.

“Apparently, there is no shortage of baby formula for illegal aliens... Why are we feeding illegal babies ahead of American babies?” he said during a broadcast.

The infant formula shortage has been worsening in recent months, ever since Abbott Nutrition recalled formula manufactured in its Sturgis, Michigan plant in February. Add this recall to the supply chain issues that were already seeing stores unable to find enough formula to stock and people are panicking. Every baby needs to be fed, so the question of whether or not the White House provided formula for babies of undocumented immigrants over American babies is not really the issue. “They’re going to need to be fed and any decent human being looks for a way to feed them, not for a way to deprive them,” Joshua Rubin, of the migrant advocacy group Witness at the Border, told Border Report.

Additionally, guidelines from U.S. Customs and Border Protection (CBP) explicitly state that detention facilities “will have diapers, baby wipes, and infant formula available for infants.” In a statement to ABC News regarding Cammack’s video, the CBP said, “Ensuring migrants, including children and infants, in our custody have their basic needs met is in line with this Administration’s commitment to ensuring safe, orderly, and humane processes at our border."

On Friday, Biden told reporters, per Reuters, that “we’re going to be, in a matter of weeks or less, getting significantly more formula on shelves” as his administration is working with manufacturers to allow more imports.