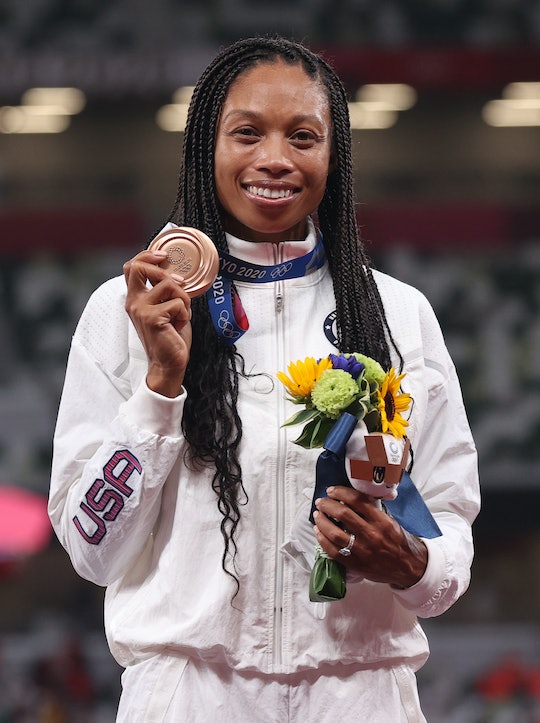 “Hopefully, a lot of mothers will see themselves in me.”

On Friday, track and field star Allyson Felix made history. She won a bronze medal at the Tokyo Olympics in the women’s 400 meter race, her 10th medal in total including six gold and three silver going all the way back to the 2004 Olympic Games. Felix’s win was also her first Olympic medal since she became a mom, which is a huge deal on a personal level. She welcomed her daughter Cammy via a C-section when she was just 32 weeks pregnant in 2018, was hospitalized with preeclampsia, and admitted to People that “it was a fight to get here.” When Felix won her first medal as a mom, she had one message to share with other mothers.

“Hopefully, a lot of mothers will see themselves in me,” she told reporters, according to People. “I just want to be that inspiration.”

This bronze medal also makes Felix the most decorated female in Olympic track and field history. Not to mention the fact that she and Olympian Carl Lewis are tied as the most decorated American athletes in the history of the Games. The accolades are certainly well deserved for an athlete competing at her fifth Olympic Games, but as Felix explained in an Instagram post on Monday, just getting there was half the battle.

“As an athlete who was told I was too old, as a woman who was told to know my place, as a mother who wasn’t sure I would live to raise my daughter,” she wrote. “I hope you see that for me, it’s about so much more than what the clock says.”

Allyson Felix knows her medal is about more than “time on the clock.”

Felix has always been aware of her role as a role model in sports who can inspire those around her, whether they are moms or the next generation of athletes. “Growing up it meant so much to see people that I look like doing amazing things,” she said. “And I’m so excited to be in a position to be able to do that.”

As she prepares for her next race on Saturday, the 4x400 relay, she is trying to be mindful of her role as role model. And not letting it take over her own sense of self worth. “I’m afraid of letting people down. Of letting myself down,” she wrote on Instagram on Friday. “I hold myself to such high standards and I’m realizing as I’m sitting here the night before my final individual Olympic final that in a lot of ways I’ve let my performances define my worth. I’ve been afraid that my worth is tied to whether or not I win or lose. But right now I’ve decided to leave that fear behind. To understand that I am enough.”