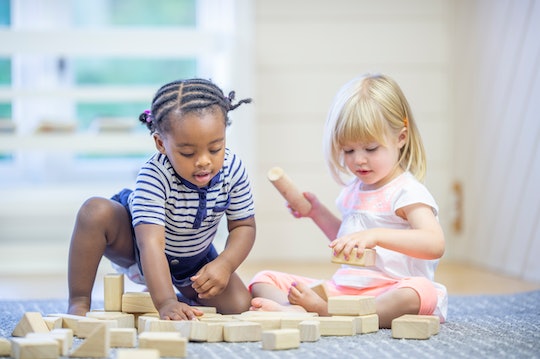 Based on the research of physician and educator Maria Montessori, the principles are based on child-led learning — not so much religion.

How do you even begin to figure out what type of education or school would be the best fit for your kid? Some believe that a good place to start is observation: By observing a toddler, watching how they interact with the people and items around them, you can become more familiar with the ways in which they learn. And those findings might lead you toward an early educational program that best suits their needs and interests. The observation of children was a fundamental practice of Maria Montessori, a physician, researcher and educator who, in the early 1900s, founded the Casa dei Bambini, or Children’s House, and demonstrated what was, at the time, a revolutionary way of learning — one which was led by the child itself.

The approach is based on many principles, but simply shared, it’s all about the child, and meeting children where they are. Known for saying young children had absorbent minds, Montessori believed kids were already prepared to learn. Ask Montessori, and she would most likely say children need less helicopter hovering from teachers, and more space and independence to play, make mistakes and learn on their own. Should they be guided in tasks? A bit. Should they be drilled? Not so much. Does religion play a part in Montessori teachings? For the most part, it doesn’t have to.

Who Was Maria Montessori?

Born in Italy in 1870, Maria Montessori was a physician, educator and very much a student of life. She went to medical school at a time when norms dictated that women, well, just didn’t do that. She studied psychology and anthropology; she worked with children and, much through her observation of how they sought stimulation and learned, developed what would be referred to as the Montessori Method. When she opened her first Casa dei Bambini, which educated and cared for lesser-served children, she was driven by discoveries that led her to develop her own teaching tools and materials for her classroom. She authored many books on her methods and lectured around the world. She opened more schools. You can find traces of her teachings in categorization and sorting toys, which encourage active discovery, and less passive absorption. To many, she is as relevant today as she was at the turn of the twentieth century.

What Are The Teaching Principles Of Montessori?

There are a few tentpoles of the Montessori Method, central to which is a trained Montessori teacher. One includes the concept of a multiple-age classroom, which spans three years, says Lynne Breitenstein-Aliberti, director of school affiliation and consultation at Association Montessori International USA (AMI). This allows kids at different ages to observe each other, and help each other with tasks. Another principle is “freedom within limits,” says Breitenstein-Aliberti, who has an AMI Primary diploma, and taught for almost 20 years at that level. Montessori classrooms are typically stacked with different activities and zones; children are encouraged to pick an activity, and respect others as they work at their chosen activity. If a child is concentrating for a long time on a given task, interruption is discouraged. In the concept of the three-hour work cycle, says Breitenstein-Aliberti, “Learning is personally relevant, not limited. Teachers give lessons to individuals and small groups. Children can explore a concept without interruption.”

Now let’s talk toys. You likely won’t find flashing, thrashing, talking toys on a Montessori shelf. Instead, you’ll more likely discover blocks, tools for real-life role playing (a mop and broom, for example), all manner of puzzles, and sorting materials. The common thread is the window for children to make their own discoveries, and figure out how to play the game themselves.

Rather than getting traditional grades in class, Montessori stresses motivation from within, as shared the American Montessori Society (AMS). Children are observed, and their progress and education discussed. “Grades are not used,” Breitenstein-Aliberti tells Romper, “however, assessment is through demonstration of proficiency and portfolio review. Instead, the individual received feedback from the autodidactic materials in order to self-correct and retain new concepts.”

The question of whether or not the Montessori education your child receives is imbued with religious beliefs might depend on the school. “There can be [any element of any religion] if the school chooses,” says Breitenstein-Aliberti. If you’re looking into Montessori schools, be sure to inquire with each school and teacher you speak about a potential inclusion of religion in the teachings. The answers you receive may differ.

The Montessori Parenting website notes that the Montessori philosophy is open to exploring all levels of spirituality, but the basis of the school is not inherently religious, nor does it follow any specific religion in its instruction.

How Can You Tell What Is, Or Isn’t, A Montessori School?

It can be tricky, since you might see the word “Montessori” on quite a few doors, but not all might be offering the same teachings. Organizations like Association Montessori Internationale, AMI USA, and AMS offer guidance, and even locators on their websites to help find schools that have received their recognition. “A Montessori School must have a free flow between the indoors and the outdoors, it must have a trained teacher for each class, mixed ages, a large class size, and open work periods,” shares Breitenstein-Aliberti.

In the end, Montessori might seem different than mainstream or other approaches like Waldorf. But if the Montessori method offers useful tools to help your child learn, it might be worth checking out. You can find Montessori education programs for early childhood through adolescence. Because every child is different, it’s great to have options.