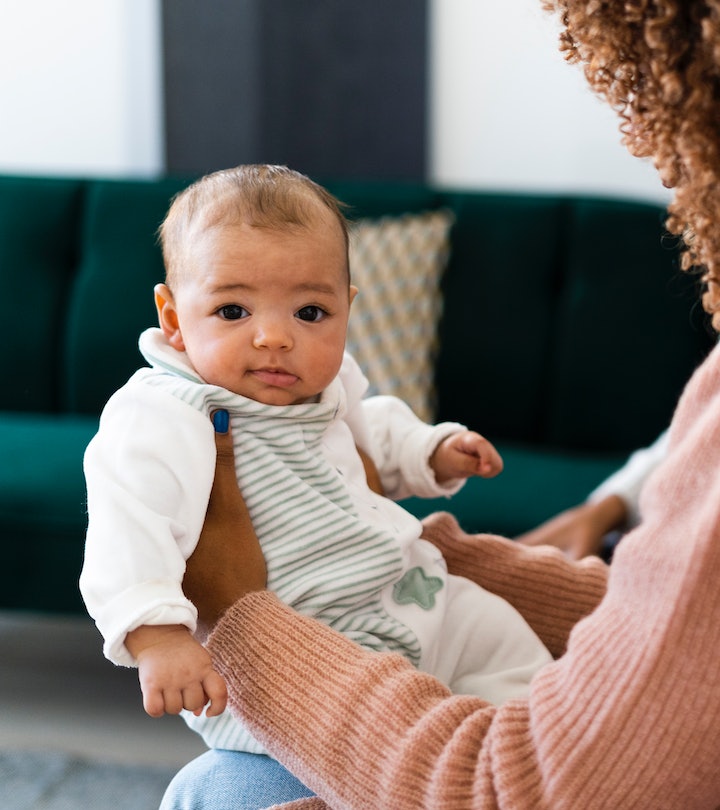 Here's What It Means To Have "Baby Fever" In Your 20s, According To Experts

There's science behind it.

The phenomenon known as "baby fever" is a topic loosely tossed around in conversations among 20-somethings for a variety of reasons. Whether it's a way to explain the intense need to smell the top of a baby's head, a desire to start your own family, or to simply let people know you have no desire to parent, the phrase is bound to come up. If you are experiencing baby fever in your 20s, know that you're not alone and that, well, experts might be able to tell you why.

While you may not go around telling everyone “I have baby fever,” exactly, experiencing this very common occurrence may look more like getting a smile on your face when you see children playing in the park, searching “cute baby names” on the internet, constantly keeping up with the Kardashian-Jenners posting about their children, and maybe even feeling a bit jealous of your new parent friends at times. So many people in their 20s and 30s experience some form of baby fever that it might seem like there should be some bodily, hormonal explanation for it. However, experts say that might not actually be the case. If that’s so, what is baby fever exactly and what causes it in the first place?

What is the meaning of baby fever?

Baby fever generally refers to the desire have children and the longing to conceive. "Baby fever is a romantic description of an emotional reaction,” Dr. Edward Marut, an OB-GYN and reproductive endocrinologist at Fertility Centers of Illinois, tells Romper. Marut says that when a person feels an "intense longing to have a baby, the longing likely releases oxytocin from the brain."

Oxytocin, also known as the “love hormone,” is most commonly linked to “maternal behavior, lactation, selective social bonding, and sexual pleasure,” according to the American Psychological Association. So if someone longs for a baby, and oxytocin is released, they are likely to associate the idea of having a baby with a positive feeling.

"The deeply intense desire to have a baby known as 'baby fever' is a real phenomenon," Ashlee Binns, a fertility specialist with Fifth Avenue Fertility Wellness in New York City, who has a doctorate in acupuncture and oriental medicine, tells Romper. Binns says researchers at Kansas State University studied "baby fever" in 2011, and found that not only does it exist, but that baby fever exists in both men and women.

"Men can also have baby fever, because it is a psychological and emotional reaction to the desire to parent," Marut confirms. In fact, a study published in the Austrian Academy of Sciences Press found that a man’s desire to have a child actually increases with age.

What causes the "baby fever" emotion?

So, what causes baby fever, exactly? Binns says there are three factors that Kansas State University researchers uncovered, which "include having positive interactions with babies, like playing and cuddling," and whether or not someone has had negative exposure to babies, "like spit up and tantrums," which "dampens the desire to have a baby."

The third factor is how someone views the "trade-offs" of parenthood. "Those with baby fever see only the positive impacts on their life," Binn says. Birth rates decline in times of economic recession, according to the Pew Research Center, so things like the financial impact of a child, a person’s access to adequate and affordable health care, or how they believe a baby will impact their quality of live, can all impact whether or not a person feels the desire to have a child.

In a more recent 2021 study published in the Journal of Experimental Psychology: Applied, researchers found that baby-positive social media and advertising also play a heavy role in baby fever for both men and women aged 18 to 35. "It is also thought that social and familial factors can be an influence as well,” Binn continues. “When people are around friends and families with babies, it can trigger that urge to have one, too."

It’s the idea that parenthood is a common societal milestone in life that is likely contributing to your baby fever instead of, say, hormones. As far as science goes, there aren’t any studies pointing to hormonal surges found in young adults that lead to an urge to have a baby during this phase of life. Instead, as Binn says, it’s likely all psychological influence.

In terms of numbers, having children is still an incredibly common thing that couples do. In 2021, about 40% of all U.S. families lived with children of their own under the age of 18, according to the U.S. Census. That being said, the general desire to have children is going down. According to a 2021 Pew Research Center report, about 44% of non-parents ages 18 to 49 say it is not too or not at all likely that they will have children someday, which is an increase from the 37% who said the same in a 2018 survey. Still, the majority (56%) of non-parents in 2021 report being either very likely or somewhat likely to have children someday.

What does it mean to have baby fever in your 20s?

If you’re experiencing baby fever in your 20s, chances are it’s because you’ve analyzed the costs and benefit sof having a child and have had some memorable and positive interactions with babies in the past. You’ve probably come across a baby announcement or two as well, which is likely impacting your desire to be a parent. One thing is for certain, though: what you’re experiencing is real.

This article was originally published on June 8, 2018