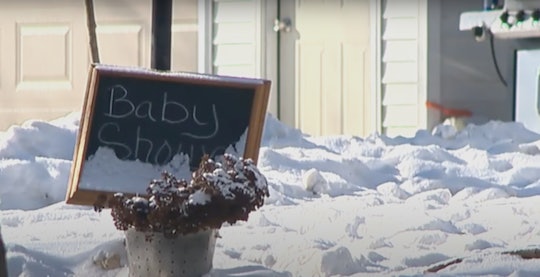 One partygoer was struck and killed by shrapnel from the cannon.

What was meant to be a celebration of new life, quickly turned into a tragic loss of life when a Michigan baby shower ended in one partygoer's death after a celebratory cannon exploded. According to local law enforcement, a 26-year-old man was struck and killed by shrapnel expelled from a cannon that exploded when fired to celebrate the upcoming arrival.

Michigan State Police have confirmed the death of Evan Thomas Silva. The 26-year-old was attending a baby shower in Gaines Township on Feb. 6 when he was struck by shrapnel from a cannon that exploded some 10 to 15 feet away from him. According to CNN, Silva was the only party guest to be hit by shrapnel, which also struck three vehicles and the garage of the home where the party was hosted. Silva was taken to a local hospital in Flint where he died from his injuries.

"We suspect that there was too much gunpowder in [the cannon] and if there isn't regular maintenance when you're using explosives, there could be a hairline fracture that you can't see with the naked eye," Michigan State Police Lt. Liz Rich told The Flint Journal. "It could have been anything like that but [officers] suspect that there was too much powder and it just fractured the entire cannon and that's what made it explode."

While a number of gender reveal parties have ended in injuries and fatalities for years now, Michigan police said the cannon involved in Saturday's deadly blast was not fired as part of a gender reveal trick. Rather, Rich told The Flint Journal the cannon, which was purchased at an auction by the homeowner, was fired merely in celebration of the new baby's impending arrival. Police described the cannon as being similar to a signal cannon, which produces a flash, smoke, and a loud boom when fired.

"The homeowner reported it had been shot several times," Rich told WJRT. "If there aren't regular inspections on a device like this, the cast material can wear away."

According to WJRT, police found pieces of the exploded cannon as far as 25 feet away from where it had been fired.

When Michigan State Police have finished their investigation into the blast they will send a full report to the Genesee County Prosecutor, who The Flint Journal reported will determine if the incident was a fluke accident or if there was negligence involved that may warrant charges.

In the meantime, Michigan police have urged expectant parents to remember that safety should always trump a cool, but potentially dangerous, party trick.