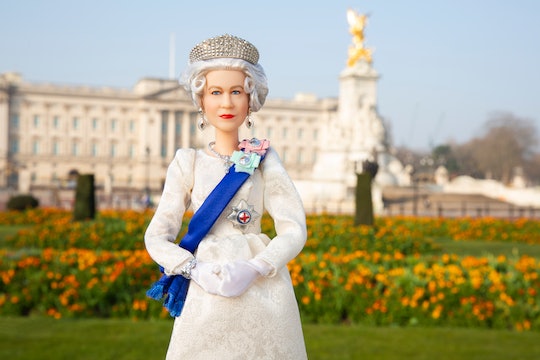 If ever there was a collector’s item, this is it.

If you’re looking for a way to celebrate Queen Elizabeth’s seven incredible decades as the longest reigning monarch in British history, but you can’t make it to the United Kingdom for her Platinum Jubilee, why not consider a Barbie? Because now Queen Elizabeth has her own Barbie with a tiara and a sash and everything. If ever there was a collector’s item, this is it.

As part of its Tribute Collection, Her Majesty Queen Elizabeth is being recognized by the iconic Barbie brand for her 70 years on the throne with a doll made in her likeness. This marks the first time Queen Elizabeth has ever had a Barbie made in her honor.

“Last year, Barbie launched the Tribute Collection to celebrate visionaries for their incredible contributions, impact and legacy as trailblazers,” Barbie said in a statement shared with Romper. “As the first British monarch to celebrate a Platinum Jubilee, The Queen’s extraordinary 70-year reign has seen her lead with a devotion to duty, humanitarian efforts, and a life of public service.”

Revealed on her birthday on April 21, the Queen Elizabeth II Barbie doll captured Her Majesty’s likeness in great detail, from the crown jewels to the long gloves and gown and the Queen’s inimitable expression. Barbie designers chose to recreate a dress Queen Elizabeth herself has worn for royal portraits, and her tiny tiara is a reproduction of Queen Mary’s Fringe tiara. Even her sash is held together with tiny medallions on the ribbons styled as the Royal Family Orders.

Collectors who want to preserve their Queen Elizabeth Barbie in her box will be happy to note that the packaging was inspired by Buckingham Palace, with a hint of the throne in the background and red carpeting throughout. People who want to take the doll out of its package will find a Certificate of Authenticity and a doll stand to style Her Majesty in regal poses.

The special edition Queen Elizabeth Barbie is available at Walmart, Target, Amazon, and Mattel for $75.

A new Barbie created in her likeness is just one of the ways the 96-year-old queen is celebrating her birthday this year. The Royal Family Instagram account also shared an incredible photo, taken earlier this month, of Queen Elizabeth hanging out with two of her ponies and looking amazingly spry. At home, the queen reportedly kept celebrations low-key at Sandringham estate’s Wood Farm cottage.