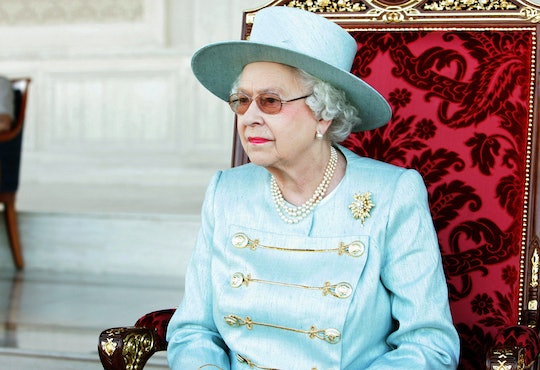 In the past year alone, Queen Elizabeth has lost her husband of seven decades, struggled with next level family drama, and oh yes, also tested positive for Covid. When the monarch started to withdraw from several public engagements, like her annual Maundy Thursday appearance this past Easter, many royal watchers worried that perhaps the seemingly indefatigable queen was finding it all too much. But boy oh boy, were they wrong. Queen Elizabeth marked her 96th birthday with a new photo, and she looks like the toughest, most magnificent woman on the planet.

Queen Elizabeth turned 96 years old on April 21 and the Royal Family Instagram account released a photo to celebrate the momentous occasion. The photo sees Queen Elizabeth, a lifelong lover of horses, posing with two of her ponies, Bybeck Katie and Bybeck Nightingale. Her Majesty stands between the two huge animals, holding their reins firmly with a big smile on her face. That’s right; at 96 years old, she manages to rein in two horses without any help from anyone. And she clearly loves it.

Also please note her amazing coat, she is never out of fashion.

Queen Elizabeth is now the longest reigning monarch the United Kingdom has ever had sitting on the throne. This year, she celebrates 70 years as Queen with her Platinum Jubilee, and her loyal royal subjects have made it clear that they are so appreciative of her decades of service to the crown. Especially now that her birthday photo shows a woman who is still vibrant and still dedicated to the things she loves the most.

Of course, Queen Elizabeth has always defied being identified by her age. In 2021, she was nominated for the “Oldie of the Year” award and turned it down with a letter to Oldie magazine, writing, “Her Majesty believes you are as old as you feel. As such The Queen does not believe she meets the relevant criteria to be able to accept and hopes you will find a more worthy recipient.”