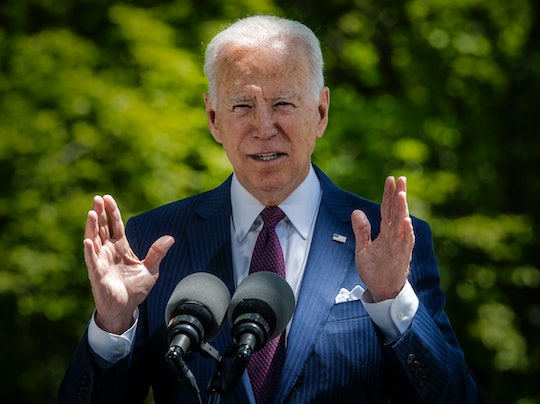 Biden Proposes Plan To Give Every Child Free “High-Quality” Preschool

If passed, the legislation would be a major win for families with children.

In his first speech to Congress, President Joe Biden announced a $1.8 trillion plan to expand access to education and child care while also supporting families with paid leave and anti-poverty policies. Biden’s proposed plan includes a national paid leave program, universal pre-kindergarten, free community college, and expanded access to affordable child care and would be largely paid for by increasing the income tax rate for the top 1% of filers and closing certain tax loopholes that tend to benefit only the very wealthy.

Known as the American Families Plan, the package Biden revealed Wednesday builds off the $1.9 trillion American Jobs Plan signed into law in March. While the Jobs Plan aims to create millions of “good” jobs, effectively rebuilding both the nation’s infrastructure and workforce, the Families Plan seeks to invest directly in children and families.

“It is not enough to restore where we were prior to the pandemic,” the White House said when unveiling details of the American Families Plan Wednesday. “We need to build a stronger economy that does not leave anyone behind — we need to build back better.”

According to a fact sheet released by the White House ahead of Biden’s speech, the American Families Plan will provide all 3 and 4-year-olds with free access to quality preschool and all first-time college students with two years of free community college, regardless of their family’s income.

“The great universities of this country have conducted studies over the last 10 years,” Biden said in his address to Congress. “It shows that adding two years of universal high-quality preschool for every 3-year-old and 4-year-old, no matter what background they come from, it puts them in the position to be able to compete all the way through 12 years. It increases exponentially their prospect of graduating and going on beyond graduation.”

The plan would also ensure low-and-middle-income families spend no more than 7% of their household income on child care and institute a $15 minimum wage for early childhood care staff, the majority of whom are women or women of color.

The American Families Plan will also create a national comprehensive paid family and medical leave program. Although the White House did not initially disclose exactly how many weeks of paid leave it planned to offer in their fact sheet, they promised the program would “bring the American system in line with competitor nations that offer paid leave programs.” A senior White House official, however, said the plan aimed to provide a full 12 weeks of paid leave 10 years after its implementation but would likely provide “not as many weeks” in the “early years.”

In an effort to reduce child hunger, the package includes measures to expand the number of schools in low-income areas that provide students with free or reduced-price lunches, a senior administration official told reporters on a press call Tuesday. The American Families Plan would also extend the increased Child Tax Credit through to 2025 while also extending the Child and Dependent Care Tax Credit.

On Wednesday, the White House argued all of the proposed policies and investments detailed in Biden’s American Families Plan were stepped in evidence-based research. For example, they cited a 2016 study that found $1 invested in high-quality early childhood programs for low-income children resulted in up to $7.30 in benefits like increased wages down the line, better health, and reduced crime. They also said research had shown sustained tax credits for families with children “yield a lifetime of benefits,” such as higher lifetime earnings and completing higher education while paid parental leave programs were known to help keep women in the workforce. Additionally, new research from Columbia University and the National Women’s Law Center found universal child care would boost women’s collective lifetime earnings by $130 billion.

Overall, the American Families Plan includes roughly $1 trillion in investments and $800 billion in tax cuts. The Biden administration claimed Wednesday that both the Families Plan and the Jobs Plan would be fully paid for in 15 years. To cover the costs of the legislation, Biden has proposed reversing a 2017 tax cut for households earning more than $1 million, or roughly the top 1% of taxpayers.

“We can’t be so busy competing with each other that we forget the competition is with the rest of the world to win the 21st Century,” Biden said Wednesday. “To win that competition for the future, we also need to make a once-in-a-generation investment in our families — in our children.”