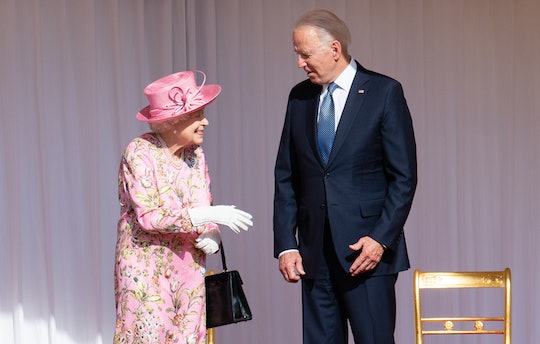 Biden Said The Queen’s “Generosity” Reminded Him Of His Mother

Will there be bows and curtsies?

If ever you needed a sign that life is slowly going back to normal, here’s some news for you. President Biden met Queen Elizabeth at Windsor Castle on June 13, which marked their first meeting since he took over the Oval Office in January.

President Biden, who was in town attending the G7 summit in Carbis Bay, met Queen Elizabeth alongside his wife, Dr. Jill Biden on Sunday. Not only did the Bidens and Queen Elizabeth met for tea, according to the Washington Post, but Biden told reporters after that he was most taken with the fact that she reminded him of his late mom, Catherine “Jean” Biden, who died in 2010. “I don’t think she’d be insulted, but she reminded me of my mother, the look of her, and just the generosity,” Biden told reporters after his meeting.

Biden has described his mom as “the quintessential lady” who valued honor and responsibility, according to The Hill. So, this is a pretty great compliment to Queen Elizabeth, who Biden last met in 1982 while serving as a senator for Delaware, according to the Associated Press. A lot has happened since then, to say the least.

President Biden will meet the Queen.

“The Queen will meet the President of the United States of America and First Lady Jill Biden at Windsor Castle on Sunday, 13th June 2021,” Buckingham Palace announced in a social media statement on Thursday before the meeting.

President Biden had not traveled to the United Kingdom for an official royal visit with Queen Elizabeth, presumably due to travel restrictions put in place because of COVID-19. Now that the United States is on track to reach Biden’s goal of 70% of adults receiving their first dose of the COVID-19 vaccine by July 4 and 75% of adults in the U.K. have also been vaccinated, the time has come. Biden finally met Queen Elizabeth on her own turf along with First Lady Jill Biden by his side and even extended an invite for her to come to the White House, according to People.

What Did They Discuss?

Biden told reporters that Queen Elizabeth had asked him about two other world leaders. “She’s extremely gracious,” he said. “That’s not surprising, but we had a great talk. She wanted to know about the two leaders that I — the one I’m about to meet with, Mr. Putin, and she wanted to know about Xi Jinping, and we had a long talk.”

As the longest reigning British monarch in history, Queen Elizabeth has met every president other than President Lyndon Johnson since she became queen. That’s 12 presidents in total. She even had lunch with President Trump in 2019. While we don’t know exactly what else Queen Elizabeth and Biden talked about, there was a lot for them to cover. In the past Queen Elizabeth has chatted with presidents about horseback riding (President Reagan) and recipes for grilled scones (President Eisenhower). After such a long dry spell without major visits, anything could have happened. Who knows, maybe they chatted about their shared love of dogs?

Did The Rest Of The Royal Family Join Them?

While other members of the royal family like Kate Middleton and Prince William did not attend Queen Elizabeth’s meeting with the Bidens, they were able to meet at some point during their trip. Middleton and Jill Biden made a special trip to visit students and teachers at the Connor Downs Academy in Cornwall on Friday, just days before President Biden’s meeting with Queen Elizabeth. The two education advocates stopped to talk with students and teachers about their work and co-penned an op-ed for CNN about the importance of early childhood education. “The two of us believe that early childhood care and education should be seen as among the defining, strategic issues of our time,” they wrote. “What would happen if we really followed the science of early childhood and started focusing on the things that would make the biggest difference for children and those who guide them? We could transform the prospects of an entire generation.”

It’s safe to say that this royal visit with the president was one of those flashy historic moments we’ve been waiting for.

This article was originally published on June 3, 2021