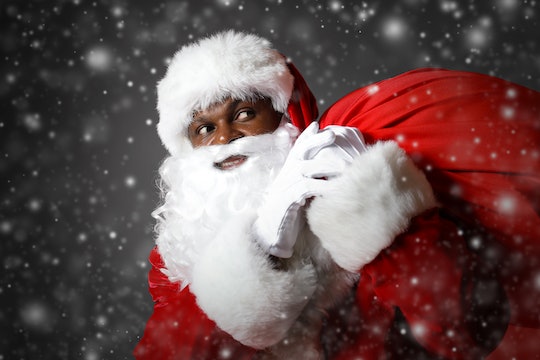 “I can't express how magical this moment was.”

For the first time in U.S. Disney theme park history, Black children will see a jolly Ol’ Saint Nick that looks like them. This holiday season, Black Santas will be at the Walt Disney World Resort in Buena Vista, Florida, and Disneyland in Resort in Anaheim, California.

Disney Parks told CNN that the move is part of the company’s commitment to more diversity and inclusion. “Santa Claus is represented in various ways in local and regional communities and around the world — and in that spirit, Santa Claus will reflect the diversity of surrounding communities at both Disneyland Resort and Walt Disney World Resort,” a Disney spokesman told CNN.

It appears that Black Santa Claus made his jolly debut on a float at Magic Kingdom during Disney’s Very Merriest After Hours earlier this month. TikToker @rozyqueenofcups captured the melanin, magical moment and shared it on her page. “I can't express how magical this moment was. Thank u @disneyparks for the representation,” they captioned a short video of the Black Santa waving to the crowd from his sleigh during a parade on Nov. 15.

Saunders Claus, one of the first Black Santas to appear at Disney this year, told the HuffPost it was “powerful” to see how his inclusion left an impact on others. “All he wanted to do was see me. He’d waited 35 years to see a Santa that looked like him,” Claus told HuffPost about the reaction from one Black man when they saw him. “The emotions he expressed were just very powerful and very Christmas-spirit. When I asked what he wanted for Christmas, he told me that I had already given it to him.”

Representation is important for kids, specifically minorities, to learn about themselves, their culture, and the world around them. According to the American Academy of Pediatrics (AAP), teaching children racial bias can begin as young as six months and by the age of 12, many children are “set in their beliefs”. Dr. Ashaunta Anderson and Dr. Jacqueline Dougé from the AAP suggest having open conversations about color with your child, pointing out stereotypes in movies, books, as well as holiday traditions. Resources such as Find Black Santa, can help parents find, post, and share events about Black Santa Clauses across the country.

In a 2018 essay for Romper titled It's Easier To Believe In Santa If You're White, Priscilla Blossom wrote that Black children will have an easier time “believing in a Santa that looked more like them.”

“White children might not have much trouble believing in Santa, then, as he may resemble one of their own grandparents, or great-grandparents, or any other older person they know,” she wrote. “But what about Black children, or indigenous children, or other children of color? They might very well be among the first to question why Santa looks the way he does, or more importantly, why he looks nothing like they do.”

It’s nice to know Disney is tapping into this inclusivity and giving Black Santa a seat on the sleigh and someone Black kids can feel represented by.