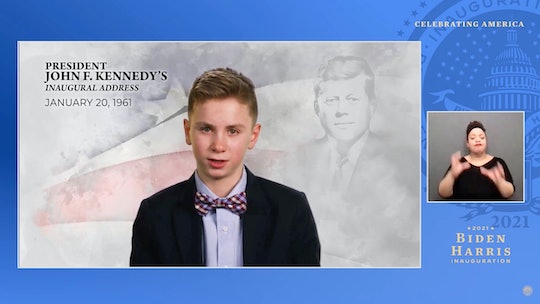 The Sweet Moment Between Brayden Harrington & Biden That You Missed

Wednesday was a day of hope and change for so many people. A day for "Feelin' Good," as John Legend sang. And one 13-year-old boy's speech at Biden's inauguration special had people feeling really good. Because he was the same boy who had bonded with President Biden on the campaign trail over their shared struggle with stuttering. Yet there he was, bow tie and blazer and everything, reading John F. Kennedy Jr.'s own inaugural address in front of the entire world.

More Like This
What Can We Expect When The Bidens Meet With The Queen?
20 Candid Photos Of Queen Elizabeth With U.S. Presidents Over The Years
High School Valedictorian’s Speech Taking Aim At Texas’ Restrictive Abortion Law Goes Viral
China Hopes New Three-Child Policy Will Boost Declining Birthrates

And the internet was unreservedly cheering him on.

People might remember young Brayden Harrington from the final night of the Democratic National Convention, when he appeared via video to talk about how Biden had inspired him when he met him on the campaign trail in New Hampshire. As the brave young man told the world, "He told me that we were members of the same club: We stutter. It was really amazing to hear that someone like me became vice president."

Biden apparently pulled Harrington aside to show him his own speech where he had made changes to ensure he could say things more easily when speaking publicly. And it made all the difference in the world to the young boy. "I'm just a regular kid, and in a short amount of time Joe Biden made me more confident about something that's bothered me my whole life," he said.

That confidence was clear on Wednesday night, when Harrington read JFK's inaugural address as part of Biden's televised inauguration special.

Brayden Harrington impressed everyone with his reading at Biden's inauguration.

Social media users reacted to Harrington's speech, said so carefully and with such skill, by applauding his courage. Like this social media user, who wrote, "Really! National stage and Brayden knocks it out of the park. Pressure Schmessure. Brayden , you can do anything you strive for now, or in your bright future. Way to go! So happy for you all, so hopeful for our future. You make it glow."

Brayden Harrington knocked it out of the park reciting JFK's speech.

Another wrote that they remembered when President Kennedy delivered this speech in 1961 and it "sent shivers down my spine then, as did this young man’s reading."

People are cheering for Brayden Harrington.

This person simply wrote, "And I sobbed immediately. He nailed it."

One social media user pointed out that Harrington managed to get through the speech without "one hint of a stutter." If he had stuttered, of course it would have been perfectly understandable. But I imagine he must have been pretty proud of himself for getting through such an important, historic moment.

Brayden Harrington did not stutter during his recitation of JFK's speech.

Like so many other people on Wednesday, this woman wrote "I cried. It was a beautiful testament."

Finally, the Embassy of Ireland official Twitter page had these beautiful words to say about Brayden Harrington's recitation, "Brayden Harrington, who President Biden encouraged to recite Yeats to overcome a stammer, delivers President Kennedy's immortal lines as fluently as the great orator himself. A profile in courage & resilience."

Brayden Harrington has a bright future ahead of him. The New York Times reports that he is writing a picture book called Brayden Speaks Up for HarperCollins, which is a huge deal.

All because a politician took time to speak to him about his own struggles. To listen to him. To give him a voice.