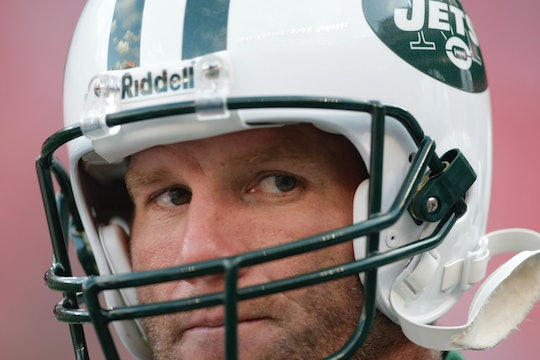 It’s a “warning from the future.”

Brett Favre is one of the most recognizable players in NFL history. He’s a Hall of Fame member, playing professionally from 1992 to 2010. Now he’s using his platform to urge parents to keep their young kids out of tackle football until they’ve past their most formative years. Specifically, until they’re older than 14.

Favre, who is father to two daughters himself, partnered with the Concussion Legacy Foundation to star in a new PSA called “A Warning From The Future.” The video sees a young boy dressed in Favre’s iconic #4 football jersey addressing his parents, “Mom, dad? Let’s talk about tackle football,” the young boy says. “I just learned about CTE, the brain disease caused by repeated hits to the head. The more years I play, the more I’m at risk.”

The young boy changes to a teenager who says, “By the time I’m a senior in high school, I’ll have played 13 years of tackle football. I could already have CTE. And it will continue to destroy my brain, even after I stop playing. By the time I’m your age... ”

Finally, it’s Favre himself speaking to the parents. “I could be fighting depression, struggling to keep my thoughts straight. I could become violent, even towards my own children. When I’m your age, what will matter to me is not my youth football career, but that, like you, I’m a great parent.”

CTE, or chronic traumatic encephalopathy, is the term medical professionals use to describe brain degeneration after repeated head trauma. A 2018 study from the Annals of Neurology found that children under the age of 12 who played football were at an increased danger of CTE, particularly tackle football.

Favre admitted to TODAY that he’s been playing football for so long, he doesn’t know if he has CTE or not. “I don't know what normal feels like. Do I have CTE? I really don't know," Favre explained. "Concussions are a very, very serious thing and we're just scraping the surface of how severe they are."

Ultimately, Favre is urging parents to protect their children from these risks and choose flag football over tackle football.