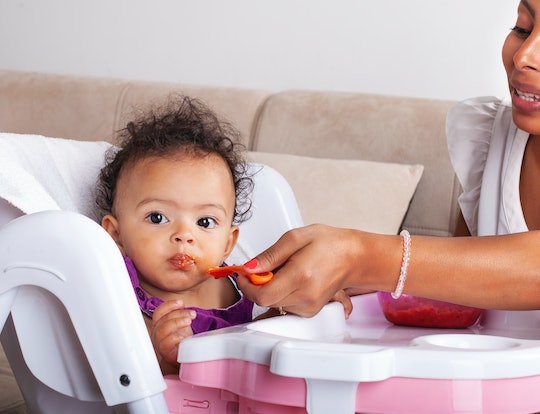 Cinnamon Is A Kid Favorite, So Here's How To Give The Feel-Good Spice To Your Baby

It’s the perfect addition to applesauce.

Used to add a sort of savory-sweet zest to a myriad of foods from baked goods to scrumptious soups, cinnamon is not only a spice common in the food-world, but the scent is added to everything from decorative candles to cinnamon-scented brooms. The major feel-good vibes that come from smelling cinnamon have even been reported to be used by retailers as a way to get consumers to spend more money, according to a report by Time in 2011. Wanting to give your baby a taste of the season seems reasonable, but is it safe?

Can babies have cinnamon?

"Babies can safely try small amounts of cinnamon after 6 months, and it’s a great way to flavor some of their favorite first foods like apple and sweet potato puree," Alicia Tucker, M.D., general pediatrician at Children’s National hospital tells Romper.

Tucker does caution that although cinnamon can be sprinkled on food, parents should never give cinnamon to children by itself. "Cinnamon in small amounts as a spice on foods is safe, however it should not be given to babies or children to eat in the powdered form. The spice particles can be inhaled and cause serious lung damage."

What should parents know before giving their baby cinnamon?

Another common concern when giving cinnamon to babies is the amount which is given, since some cultures use the spice as a medicinal supplement. "Cinnamon has a long history of being used in traditional and complementary medicines for anti-inflammatory properties. Studies have not shown any benefit to using cinnamon per the NIH NCCIH (National Center for Complementary and Integrative Health), and the safety of high doses of cinnamon have not been evaluated in infants and children and is not recommended," Tucker says. "Cinnamon, either the powdered spice or essential oil, should not be used for any specific health conditions, but can be enjoyed as a great way to flavor your babies' foods without sugar."

Although cinnamon rarely causes allergic reactions, according to Healthline, consuming large quantities can lead to some unwanted side effects, says Ilyse Schapiro, MS, RDN, in private practice in New York and Connecticut. "Allergies to cinnamon in babies are rare, but large doses can cause stomach upset (diarrhea, vomiting, stomach cramps), or irritations on the skin (hives, rash, itchiness, or redness) or mouth (tingling or itching)," Schapiro tells Romper. So, you'll want to make sure that you are closely monitoring how much cinnamon you're giving your baby.

How can you introduce cinnamon to your baby’s diet?

Once you've determined that your baby fits the age criteria to safely consume some cinnamon-y goodness, the question of exactly how to incorporate it into their diet will likely rear its fall-flavored head. Dr. Natasha Burgert, a pediatrician based in Kansas City, tells Romper that cinnamon can basically be used with any food your baby is already eating. "Babies can eat all sorts of spices, including cinnamon, with first foods. A sprinkle of spice can add flavor to purees to increase interest and entice early eaters," Burgert says. "Cinnamon can add enjoyment to many healthy fruits and vegetables in order to expand an early eater's palate. It's the food itself, and not the spices, that most families focus on in order to provide early nutritional benefits to kids."