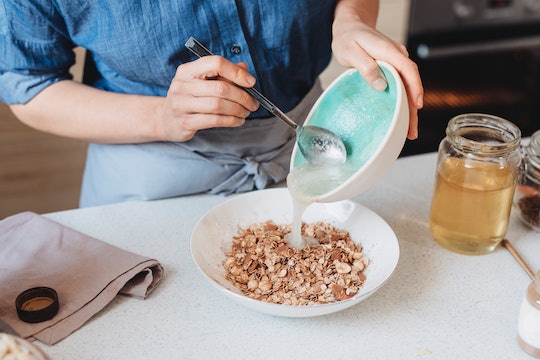 Can Coconut Oil Help With PCOS For Real?

If you’re one of the many women who suffers from Polycystic Ovarian Syndrome (PCOS), any potential remedy might seem worth exploring — especially one as natural and seemingly harmless as coconut oil. There’s been some buzz in recent years about the popular oil’s ability to treat symptoms of PCOS. But can a substance used for everything from cooking to makeup removal really help with such issues as infertility, depression and chronic fatigue?

Before talking about whether or not coconut oil can help ease PCOS symptoms, it’s important to understand what PCOS is, because it’s not totally black and white. “PCOS or polycystic ovarian syndrome is a condition that affects women due to hormonal imbalances,” Dr. Kecia Gaither, double board-certified in OB-GYN and Maternal Fetal Medicine, tells Romper. She adds that it's thought that three hormones are primarily affected: Androgens (male hormones), insulin, and progesterone. Women affected with PCOS have higher than normal levels of androgens, they do not respond well to insulin (a hormone that impacts blood sugar level), and progesterone, a hormone involved with menstruation, may be low in those living with PCOS, she explains.

PCOS is a relatively common condition affecting one in 10 people with ovaries of childbearing age, per the Department of Health and Human Services' Office on Women's Health. And the disorder has gotten more awareness as celebrities including Lea Michele and Jillian Michaels have been vocal about their experiences with PCOS, as reported by Parade. But while it’s fairly common, PCOS still isn’t talked about regularly or totally understood.

What Are The Symptoms of PCOS?

Symptoms of PCOS vary depending on the person. Often it can cause ovarian cysts and recent studies have shown low-grade inflammation associated with PCOS. Dr. Gaither lists the following common symptoms of PCOS:

Can Coconut Oil Help With PCOS?

Coconut oil is not considered a treatment for PCOS, Dr. Gaither notes, because there is no cure for PCOS. However, that doesn’t mean you should ditch it completely as coconut oil does have certain health benefits that can be helpful to those with PCOS. Coconut oil has a lot of nutritive benefits for all women, Dr. Gaither tells Romper, but for those with PCOS specifically the oil could help with the following:

The best way to alleviate PCOS symptoms is through nutrition and exercise, according to the PCOS Awareness Association. While they don't mention coconut oil specifically, the nutritional benefits of coconut oil may be helpful. Amy Plano, the self-described "PCOS Dietician," says on her website that coconut oil “stabilizes blood glucose levels, improves blood lipid profile, helps with thyroid regulation, [and] promotes an ideal weight." And in addition to lifestyle changes like exercise and nutrition, your doctor may recommend certain medications to treat PCOS including birth control pills or anti-diabetic drugs, per research in Frontiers of Physiology.

Before you start adding coconut oil to everything, if you have PCOS or suspect that you do, it’s best to speak with your doctor before taking treatment into your own hands. “For any woman with PCOS, it’s best to confer with your OB-GYN and/or Reproductive Endocrinologist who can evaluate your laboratory profile (hormone levels, screen for diabetes, lipid/cholesterol profile) and pelvic ultrasound to evaluate your uterus and ovaries,” Dr. Gaither tells Romper.

She adds that PCOS treatment is individualized based on each specific case. “Every woman has a different presentation, so to speak — so there is no exacerbating factor causing the disease to ‘flare up.’” However, if you like the taste of coconut oil there’s no harm in consuming it in moderation, it just may not make a huge difference in your PCOS.

More Like This
10 Thanksgiving Desserts That Aren’t Pumpkin Pie
20 Holiday Gifts For Neighbors They’re Sure To Love
Store-Bought Meals Didn’t Ruin Our Holidays. They Made Them.
Thanksgiving Recipes Perfect For Little Helpers

This article was originally published on Dec. 20, 2017