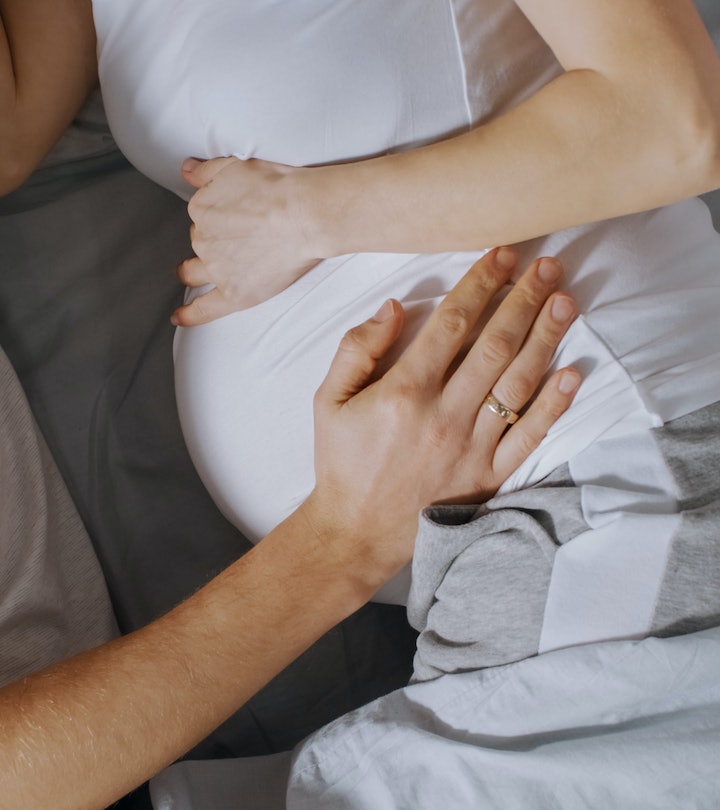 Can You Have Sex While In Labor? 2 Women Share How They Got It On Before Delivery

Plus, how to make sure you’re doing it safely.

I totally understand the allure of a pregnant person’s curvaceous figure and fertility-driven pheromones. I know first-hand how a mom-to-be’s libido can rev up well into week 40. And while having sex might naturally induce labor as the big day nears — my midwife called it “due date insurance” as semen softens the cervix, and having an orgasm can cause uterine contractions — apparently some people have sex during labor, too. Which led me to wondering, can you really have sex while in labor? Is that even possible? Comfortable? Safe?

Speaking as someone who vividly remembers the body-rocking contractions and intense nausea during labor — not to mention the constant in-flow of nurses and visitors checking vitals and chatting — I truly can’t fathom thinking, “You know what sounds good right about now? Some sex.”

And yet not everyone would agree. Sometimes getting it on when you’re about to have a baby makes for a bit of an unconventional solution to getting the ball rolling. “It’s well-known that the ejaculate of sperm contains prostaglandins that help soften the cervix and help bring on contractions,” board-certified OB/GYN Dr. Sherry Ross, M.D. tells Romper. “During sex, the natural hormone oxytocin is produced, [which] can also help bring on uterine contractions.” While this may not sound like the most comfortable thing in the world, it’s an effective method to induce labor for some.

Plus, sex might be just the thing to help you relax in an intense and strenuous situation. “Mentally, sex and orgasms can reduce stress and anxiety, and bring a closeness to you and your partner during an otherwise stressful time,” Ross explains. Whatever your reason may be, there are a few safety measures to keep in mind if you’re considering getting intimate that close to delivering.

Is Sex During Labor Safe?

First of all, what does “labor” mean, exactly? “Defining labor can be different for every woman,” Ross tells Romper. “Medically speaking, labor can mean having regular uterine contractions that cause cervical changes [or] dilation,” she says. According to John Hopkins Medicine, labor is defined as a series of continuous and progressing contractions, and it usually starts within two weeks before or after the due date.

When it comes to having sex during labor, “the concerns are always related to infection,” Ross says. “Having sex can push harmful bacteria from the vagina into the protective space of the baby. Infections inside the uterus where the baby is located can cause fetal distress and increase the risk of an infection affecting the baby.”

Having sex during early labor, she says, is probably safe, but sex is not recommended after your water breaks because of increased risk of infection. “These harmful bacteria can lead to fever and fetal distress in some circumstances, increasing the risk of needing a C-section. It's not recommended to have sex once your water breaks,” she explains. “The truth is there are very limited numbers on [how many] couples are having sex after the water breaks, so hard to say how common it actually happens,” Ross tells Romper. “The recommendation for a woman who has broken her bag of water is not to take a bath, swim in a pool, take a jacuzzi, or have sexual intercourse.”

As your cervix prepares for labor, you will lose your mucus plug. This will generally happen around 37 weeks of pregnancy, but it does not mean you’re in labor. “It does mean that this protective ‘plug’ is gone, so there could potentially mean an increased risk of infection … [this] doesn’t necessarily mean you cannot have sex,” Ross explains, adding that in general, couples can have sex after the mucus plug is lost as long as the doctor has given the green light. “Discussing these issues with your healthcare provider is always recommended so that you don’t increase your risk of infection.”

Whether a pregnant person can safely have sex after losing the mucus plug may also depend on which week of pregnancy they are in. Board-certified OB/GYN Paula Anderson previously told Romper that if you lose your mucus plug before 36 weeks, you should see your doctor for an evaluation before having sex, because you could be totally fine continuing to get it on during this period. And if you’re after 37 weeks, it depends if you have other “symptoms of delivery,” she said. So, when you lose your mucus plug, you’ll need to have your doctor “evaluate whether the cervix has been softened and dilated at that stage,” Anderson told Romper. From there, they’ll tell you if having sex would create any increased risk of infection.

How Real Women Got It On Before Delivery

Knowing the risks of vaginal penetration during labor, Michelle R., a 25-year-old mom, tells Romper how she got some unconventional action before delivering. “I had to be admitted to the hospital after my water partially broke because I had Group B strep,” she says. “My contractions weren’t strong, and we were getting really impatient, so our nurse suggested nipple stimulation. My husband volunteered to help with the stimulation, so we went into the bathroom, I took off my bra, and he immediately got turned on.” Michelle briefly considered having sex before remembering that her water broke a few hours earlier. But that didn’t stop her and her husband from getting it on. “I blew him, right in the hospital bathroom,” she recalls. “We never told anyone about it; sometimes I wonder if I’m the only person in history to give her husband a blow job while she’s in labor.”

“Nipple stimulation can definitely bring on contractions,” Ross tells Romper. “Sometimes nipple stimulation can bring on a burst of uterine contractions for hours, and then they can stop depending on [whether] your body is ready to go into labor.” She also gives the go-ahead for couples to make like Michelle and try oral sex during labor: “Giving oral sex is not contraindicated while in labor if that is something you want to do for your partner.”

While Michelle probably isn’t the only one, it’s still impressive nonetheless. And yet for some pregnant couples, getting down during labor isn’t a matter of sky-high libido or unexpected arousal.

For some — like Anne O., a 30-year-old mom of three, it’s done out of sheer necessity. “I was in early labor and super duper uncomfortable,” Anne recalls. “[The baby] was already late, well over 40 weeks, and I was growing bigger by the minute. My contractions would start up and then die down a few hours later. So the night before my scheduled induction, we had sex as soon as my contractions started up. It was really uncomfortable and not fun for anyone. But within 24 hours, I had the baby. No induction needed.”

But before you try sex as the end-all to induce labor, know that Ross says it’s not actually proven to work in every situation. “It’s true that a man’s ejaculate contains prostaglandins, which can help soften the cervix, but it doesn’t [necessarily] bring on labor,” she tells Romper. “In Anne's case, she is already in early labor, so having sex certainly can't hurt, especially if her water is not broken. Sex may have helped continued the process of labor, but [it’s] hard to say if it prevented a scheduled induction.”

Moral of the story, folks: Sex during labor can be uncomfortable, but it’s not necessarily always a bad idea, as long as you get it on before your water breaks. Just be sure you’re doing it safely, and remember that it’s always best to chat with your healthcare provider a good bit in advance.

More Like This
Is It Safe To Pump While Pregnant? Experts Weigh In
Is Raspberry Leaf Tea Safe To Drink During Pregnancy?
How To Fly Safely During Pregnancy
Fun, Sexy Maternity Lingerie, For When The Mood Strikes
What Parents Are Talking About — Delivered Straight To Your Inbox

This article was originally published on Feb. 10, 2016