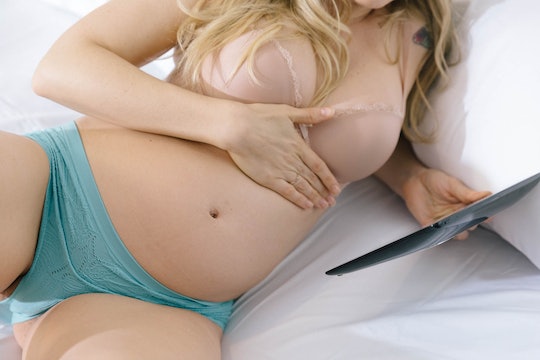 Here's How You *Actually* Stimulate Your Nipples To Induce Labor, According To Experts

There comes a time during every pregnant woman's nine months where she becomes perfectly comfortable with no longer seeing her vagina, talks about dilation with perfect strangers, and will entertain nearly any safe idea to usher along labor. Douse your food in hot sauce? You bet. Exercise? If I must. Give my nipples a bit of attention? Honey, bring it on. Some ideas are self explanatory, but others require a bit more detail. For instance, how do you do nipple stimulation to induce labor?

First of all, what exactly is the "why" behind nipple stimulation? Stimulating your breasts helps the body to release the hormone oxytocin into the bloodstream, signaling the uterine tissue to begin contractions. According to Healthline, rubbing or rolling your nipples may also help bring on full labor by making contractions stronger and longer. In fact, doctors often use the drug Pitocin, a synthetic form of oxytocin, to help induce labor.

This induction method isn't just speculative evidence — science has tried it out. According to a 2015 study published in Worldviews on Evidence-Based Nursing, women were assigned to one of three groups during their labors: nipple stimulation, uterine stimulation, and control. The results? The phases of birth were significantly shorter for the nipple stimulation group — nearly halved during the first phase of labor when compared to the control group. By whole entire hours.

Where do you sign, right? Leigh Anne O’Connor, an International Board Certified Lactation Consultant (IBCLC) and parenting coach, tells Romper in an email interview that nipple stimulation can involve a soon-to-be mom — or her partner — using her hands or a pump to get things going. If you're nursing a toddler, then you can also encourage more breastfeeding. "It does not have to be aggressive, but it should be enough to stimulate oxytocin," she says.

Once you decide your method for stimulating your breasts, it's important to know where to do so, right? According to Healthline, you're going to want to focus on the areola, or the dark circle that surrounds your actual nipple. Use your fingers or palm to gently rub your areola through thin clothing or directly on the skin. You'll also want to keep stimulation to five minutes, wait 15 minutes before trying again, and take a break if you feel contractions. Of course, if begin to be notice that you can time your contractions — meaning they come in regular intervals — and they last between 30 to 70 seconds, then it might be baby time.

If nipple stimulation isn't your thing, then you may want to try other methods for inducing labor, including walking, squatting, and climbing stairs to “move your hips and encourage your baby to descend,” Carley Mendes, a registered holistic nutritionist, childbirth educator, and expert at The Tot, tells Romper in an email interview. Sex is also helpful in encouraging labor because, as Mendes likes to say, “sex puts a baby in and sex gets a baby out." Acupuncture, acupressure, and herbal inductions, like black and blue cohosh, are popular, but "powerful," according to Mendes, and should be used under professional advisement.

Other methods include castor and evening primrose oils, as well as mechanical inductions and membrane sweeps, but they come with a list of warnings ranging from diarrhea to premature rupture of the membranes to the need for further methods of induction.

As always, check with your healthcare provider before making decisions that may affect the health of your pregnancy. But, barring a specific health condition that could lead to preterm labor, you are probably in the clear to give nipple stimulation a try.

Or you can try my method, which involved walking around Target shopping for random things only to find your water break in the greeting card aisle. (And you thought that bullseye was just for aiming you toward the dollar section.)