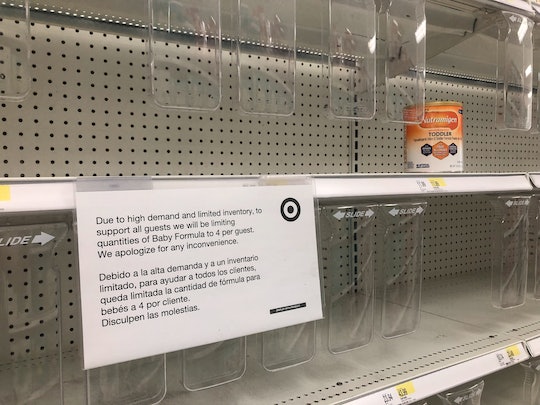 The children, a toddler and preschooler located in Memphis, rely on a specialty formula due to a health condition and were hospitalized for dehydration.

The baby formula shortage that has parents across the country scrambling desperately to try to feed their children has just hit a distressing new level. Two children in Memphis, Tennessee have been hospitalized because the specialty formula they require is out of stock, and local doctors are in “crisis” trying to find something else that might work.

Dr. Mark Corkins, a pediatric gastroenterologist at Le Bonheur Children's Hospital in Memphis, told WRAL that a toddler and a preschooler were recently admitted into the hospital because they were unable to get the formula they normally use and were unable to tolerate a replacement. Both have been diagnosed with short bowel syndrome, a condition in which their bodies are unable to absorb nutrients due to a missing section of their small intestine. The children ended up being admitted when they were dehydrated from being unable to find a replacement they could handle. The two children were being fed an amino-acid-based formula called EleCare, a product manufactured by Abbott Nutrition, which closed its Sturgis, Michigan factory after a voluntary recall of some of its products in February.

"We’re trying to do some different quote-unquote 'doctoring' of formulas that aren't usually used for this kind of a situation to try to see if we can find something that will work," Dr. Corkins told the news outlet, noting both children were currently being treated with IV fluids. While Dr. Corkins went on to note that “this is not every child, not normal children,” and that these hospitalizations were a result of children with very specific needs, he added, “but literally the formula recall has led to these children requiring hospitalization.”

The Food and Drug Administration (FDA) reached an agreement with Abbott Nutrition that will allow the company to begin production at the Sturgis plant in two weeks, with the product potentially reaching the public in two months. The FDA also announced plans on Monday to ease import restrictions to allow international suppliers of formula to ship their products into the country in further efforts to ease the formula shortage. While this is good news for parents and caregivers in the next few months, children need formula right now. Particularly children with issues like short bowel syndrome, who should ideally be fed by the mouth to encourage gut development. “In the hospital, we give them IV fluids, and the other thing we give them is IV nutrition. That's not ideal,” Dr. Corkin told CNN.

Families looking for formula as new efforts to end the shortage get underway should check out the Free Formula Exchange, a mutual aid effort where parents help each other find formula, speak to your pediatrician or reach out to Feeding America or dial 2-1-1 for help.

More Like This
Here’s How To Fight For Abortion Rights
This Map Illustrates Just How Many States Would Ban Abortion If Roe V. Wade Is Overturned
Ketanji Brown Jackson Spoke Directly To Her Daughters In Her Powerful Opening Statement
Elmo Talks About Getting His Covid Vaccine In A Cute New Video