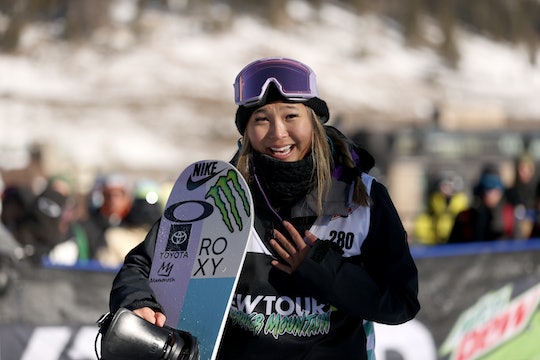 The 21-year-old Olympian has had parents by her side her entire career.

Second time around! Snowboarder Chloe Kim will be returning for the 2022 Winter Olympic Games in Beijing. She was only 17 when she competed in the 2018 Winter Olympics in Pyeongchang, South Korea, and won a gold medal in the Women’s Halfpipe competition. That same year, she went on to win ESPYs for best female athlete, best female Olympian, and best female action-sports athlete. But how exactly did she get there? With her parents and family by her side.

Who Are Chloe Kim’s Parents?

Kim’s mother, Boran Yun Kim, and her father, Jong Jin Kim, are both immigrants from South Korea, according to the International Olympic Committee. They met in Switzerland while both of them were working as travel agents. In 1982, they moved to Southern California where they raised their three daughters: Chloe, now 21, and her two half-sisters, Tracy and Erica, who are both older than the Olympian.

Her Dad Got Her Snowboarding At 4 Years Old

Kim recalled her first exposure to snowboarding in a 2018 interview with The Washington Post at 4 years old. Her father took her to the Mountain High resort in the San Gabriel Mountains outside of Los Angeles. “He wanted my mom to go with him,” she told the Post. “So he took me as bait.” The bribe didn’t work and it wasn’t a voluntary option for Kim, but she later reflected on the moment and praised her dad for it. “But I’m actually really glad he did that,” she told USA Today Sports. “And I’m really glad he just kept bringing me to the mountain.”

And Bought Her First Snowboard On eBay

The Olympian’s first snowboard was a used bargain. According to SF Gate, Kim's parents bought it for just $25 on eBay. Since then, Kim has been sponsored by big brands like Burton and Roxy.

Her Dad Quit His Job To Focus On Her Olympic Career

When she was in the third or fourth grade, Kim moved to Switzerland to live with one of her aunts but not to learn the popular winter sport. Instead, Jong Jin sent his daughter abroad to learn French, according to NBC. At the time, he explained he was not preparing his daughter for a professional career. “We didn’t really expect that you can bring her to the Olympics because her (mother’s) family, my family, no one is an athlete out of our family history,” Jong Jin told USA Today Sports. “So the reason Chloe went to Switzerland is not because of snowboard. It’s because I want her to learn French.”

But it seems he saw the potential in his daughter in the sport. Her father eventually retired from his job as an engineer so he could travel and train with her full time.

“Obviously, when I was 8, I had no idea what he was doing,” she told The Washington Post. “It was, like, ‘Why is Dad home more?’ You know? But now that I think about it, you know, I feel like it was a really bold move, and I can’t believe my mom was okay with it.”

In a California tourism board video from 2016, Kim thanked her dad for dedicating so much of his time and life to her athletic career. “If I had a message to give my dad, it'd probably be 'thank you, thank you, thank you,” she said at the time. “He's helped me so much on this crazy journey. Giving up his job, being away from my mom, and being away from home for that much just because of me? It's a lot. And I thank him for it."

As Kim prepares for her second Olympic appearance, there’s no doubt that her parents will be supporting her every step of the way. After she won the gold in the 2018 games, her dad celebrated the win with a cold beer. (You might remember the moment went viral on social media.) Hopefully, he’s able to toast to another cold one when Kim competes on Saturday, Feb. 5. You can watch the 2022 Winter Olympic Games on NBC, starting on Feb. 4.

More Like This
Serena Williams Is Retiring From Tennis To “Focus On Being A Mom”
Kristin Bell Shared Some Sweet, Rare Photos Of Her Daughters From A Family Vacation
Adrienne Bailon & Israel Houghton Welcome A Baby Boy Via Surrogate
Princess Charlotte Had A "Lovely" 7th Birthday, According To Her Parents