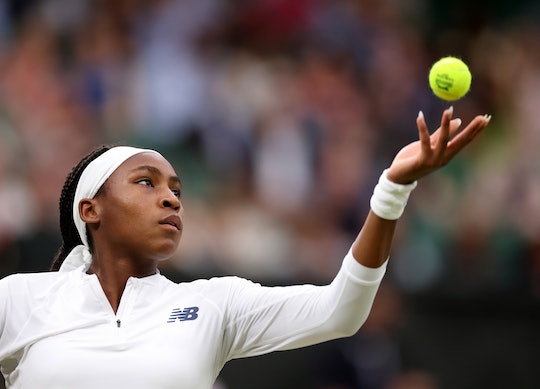 Coco Gauff said she is “so disappointed” that she “won't be able to play in the Olympic Games in Tokyo.”

Teen tennis sensation Coco Gauff has announced some disappointing news. On Sunday, the 17-year-old athlete shared that she will have to sit out the Tokyo Olympics after testing positive for Covid-19.

“I am so disappointed to share the news that I have tested positive for COVID and won't be able to play in the Olympic Games in Tokyo,” she wrote on her Instagram. "It has always been a dream of mine to represent the USA at the Olympics, and I hope there will be many more chances for me to make this come true in the future.”

The U.S. Tennis Association also released a statement expressing their disappointment in the development. “We were saddened to learn that Coco Gauff has tested positive for COVID-19 and will therefore be unable to participate in the Tokyo 2020 Olympic Games. The entire USA Tennis Olympic contingent is heartbroken for Coco,” the statement read. “We wish her the best as she deals with this unfortunate situation and hope to see her back on the courts very soon. We know Coco will join all of us in rooting on the other Team USA members who will be traveling to Japan and competing in the coming days.”

Gauff was expected to lead the 12-person Team USA Team and this would have been her first Olympic appearance. It’s not clear whether Gauff, who is eligible to be vaccinated at her age, had received a Covid-19 vaccine or if she contracted the virus at the Olympic village, as NBC News reported. Just two weeks before testing positive for the virus, Gauff shared a post on Instagram that said, “I’m so excited to compete in my first Olympics!!! See you soon Tokyo!!”

In Tokyo, there have been several protests to cancel the Olympic games as the Covid-19 numbers rise again in Japan. As of July 19, the country had over 841,000 cases and 15,000 deaths, according to World Meter.

Gauff isn’t the only Olympic athlete who’s been impacted by the virus. According to CNN, American gymnast Kara Eaker and American basketball player Katie Lou Samuelson both tested positive for Covid-19 after being fully vaccinated.

Though the Tokyo Olympics had been delayed a year because of the pandemic, safety precautions are still being taken to protect the community. And while no spectators will be allowed in the stands this year to help limit the spread of Covid-19, the show will still go on and athletes will still compete. You can watch the Olympics at home when it all kicks off on Friday, July 23.