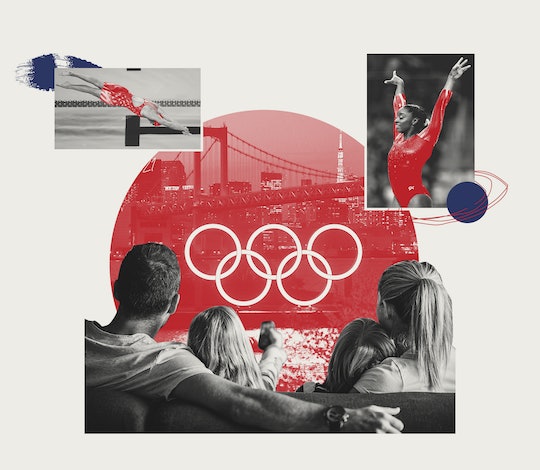 A Parent’s Guide To Watching The Olympics With Your Kids

After a year-long postponement, the Tokyo Olympics will begin on Friday, July 23.

After an even longer than usual wait, the Tokyo Olympics are almost here. Certainly, the pandemic has made this a very different event. Overseas spectators were banned from attending (including friends and family of the athletes) due to pandemic concerns. And just recently, a surge in new Covid-19 cases has prompted the Japanese Olympic Committee to ban all live spectators. But while the stadiums will be empty, you and your kiddo can still have a front row seat to the world’s most elite sports competition. But where can you watch Olympic coverage? When are all the events taking place? We’ve got you covered.

If you’ve watched the Olympics any time in the past 20 years, you’ve watched them on NBC and this year will be no different. If you’re going to watch on your TV, check your local listings. Some events will also be broadcast on USA and CNBC.

If you plan to stream coverage, you’ll still be going through NBC outlets, but there are some choices. All games, as well as the opening and closing ceremonies, will be streamed online on NBC Sports, Peacock, and the NBC Olympics website.

The opening ceremonies will take place on Friday, July 23 at 7 a.m. EST

Yes, you read that right: 7 a.m. EST. That means 4 a.m. PST and Olympic fans in Hawaii can expect to wake up at (or stay awake until) 1 a.m. to catch the ceremony live. But, let’s be honest: if you have a kid, there’s a decent chance you’re up at those times anyway! Besides, this only happens every four years. These athletes sacrifice so much to reach this level of competition; we can sacrifice a few hours of sleep!

Get used to waking up early to watch

Because of the 13 to 19 hour time difference between Tokyo and the U.S., many of the events will take place early in the morning or late at night. If you just can’t manage to wake up at 4 a.m. to watch Women’s Floor Exercise Finals, however, don’t worry: you’ll be able to watch highlights on the NBC Olympics website afterward!

Here’s when all your favorite sports are happening

All of the Olympic sports represent a triumph of the human spirit and feats of incredible physical prowess... but when it comes to viewership, some sports — like gymnastics, swimming, and soccer — loom larger than others (no disrespect, canoe/kayak). Here’s when you can catch all your favorites (times noted in links).

In addition to your old favorites, there are some new sports to be excited about

Four sports are making their Olympic debut this year, and all of them hold appeal for kids: karate, sports climbing, skateboarding (featuring pint-sized celebs Sky Brown and Kokona Hiraki representing Great Britain and Japan, respectively, who will be sure to inspire your child) and surfing. And, while not new, both softball and baseball are returning to the games after a 13-year hiatus. (You’ll want to catch those while you can, because there’s no word on whether they’ll be included in subsequent games.)

A bunch of other amazing sports will be there, too!

Look, just because a sport isn’t a popular favorite doesn’t mean it’s not worth watching... and your kiddo may well wind up finding themselves drawn to some of the more esoteric sports. After all, they spend hours watching streamers and weird unboxing videos on YouTube — who’s to say what they’ll pick up as a new favorite? There are certainly some likely contenders. What kid doesn’t love a trampoline? Or horsies? Rhythmic gymnastics? Your kid will never look at balls, hula hoops, or ribbon dancers the same way again. And we’d be lying if we didn’t admit there was something hypnotic about table tennis.

You can keep the Olympic spirit strong with special family activities

There are a number of things you can do to augment your viewing with children. Reading books about the games, for example, or holding your own family Olympics in your backyard or local park (they will think they are as fast as Allyson Felix and as nimble as Simone Biles and their unearned confidence will be hilarious). You could also try to herd cats, aka teach your child a new sport!

You can also have fun learning more about the various countries competing. If you don’t know where to start, your local library is always a good bet! You could also check out products like eat2explore, a monthly subscription box, which sends snacks, recipes, and information about countries around the world for your kiddo to experience.

And, of course, inviting (vaccinated) friends over to watch is always a great way to keep the spirit of the Olympics alive long after the games are done.

The closing ceremony will take place on Sunday, Aug. 8 at 7 a.m. EST

Again, getting up early (especially on a weekend!) is no one’s favorite thing, but after all the world has been through in the past year, what a lovely way to wrap up an event that brought us all together in a spirit of achievement and good will.