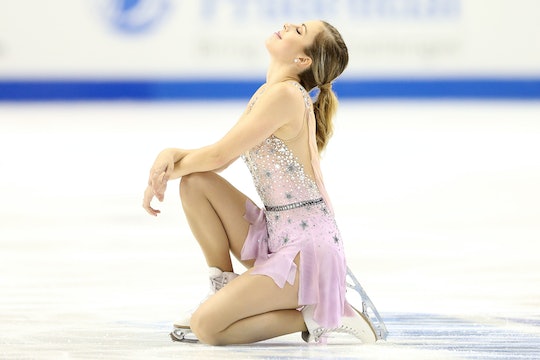 How Much Do Figure Skating Costumes Cost? They're Incredibly Detailed

I'm not going to lie, I love me some figure skating costumes. The beading, the crystals, the bold colors (or soft, whispy pastels) — it's the stuff of my never-going-to-be-a-figure-skater dreams. And it's no surprise: It turns out many of the costumes are created by top designers, like Vera Wang, and have the hefty price tag to prove it. But how expensive are figure skating costumes? Asking for a friend of course.

How Much Do Olympic Figure Skating Costumes Cost?

According to Cosmopolitan, most costumes cost anywhere from $1,000 to $5,000, and are custom-made for the skater, including pricey hand-sewn reinforced seams and embellishments like Swarovski crystals. TheGloss.com noted the most common estimation for an Olympic skating costume is approximately $3,000.

What's more, the website noted skaters competing in the Olympics usually have two costumes per season, so a skater might spend up to $10,000 just on costuming alone. And according to TIME, skating federations can pay for up to 50 percent of those costs for some of the top figure skaters, but for the rest, they're kind of on their own.

What Are Some Trends In Figure Skating Costumes?

“Today, skating costumes take cues from fashion’s runways and popular culture, perhaps with an emphasis on dresses being more tailored and designed for the skater and the music of their program," figure skating coach Marni Halasa told TheGloss.com. "Currently, we are seeing costumes that are designed to be less gawdy, showing more of the line of the body, with quality fabrics that highlight color.”

But as a former figure skating researcher, writer, and producer, as well as author of The Figure Skating Mystery series of novels, Alina Adams noted that "the shiny dresses and tuxedos are nothing compared to making sure you have the right custom-made boots and perfectly sharpened blades. Those can also cost you more than $1000, and sometimes they need to be rebuilt over and over for the perfect fit."

And perhaps that's why some figure skaters opt for DIY options when it comes to their Olympic attire. Like cute-as-a-button real-life couple, Madison Chock and Evan Bates who design all of their costumes. "I would love to be a fashion designer or involved in the fashion world," Chock told NBCOlympics.com when asked what she would be doing if she was not an athlete. The figure skater also designs costumes for fellow skaters, according to Get Up.

The same goes for Madison Hubbell, whose mother makes the costumes for her and ice dance partner Zachary Donohue, according to NBCOlympics.com. The site noted that the "design team" shops for materials together and Susan Hubbell even makes the 12-hour drive from Detroit to Montreal — where her daughter lives — several times per season for special fittings and adjustments.

Want to know a few more inside facts about figure skating costumes? Me too. Like, according to Cosmopolitan, skaters wear specially designed underwear so they don't get wedgies. Also notable? Skaters have to take special precautions to keep their jewels and sequins in place — pieces that drop on the ice earn them a deduction.

TheGloss.com also noted that all skating costumes need "to be constructed of four-way stretch fabrics with over-lock seams that will not ‘pop’ or break under the stress of intense movement.” Which brings us back to my original thought — can I squeeze a figure skating costume into my budget? Madison Chock, are you out there?

More Like This
Mom vs. Trend Shows You How To Recreate Popular Gen Z Beauty Trends
The Ultimate Baby Registry Checklist
Ashley Graham On The “Fun, Organized Chaos” Of Raising Twins
Let’s Talk About Postpartum Hair Loss — & The Best Products To Deal With It

This article was originally published on Feb. 8, 2018