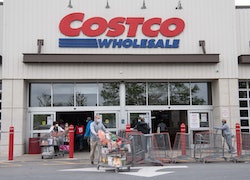 Costco Is Ringing In The New Year With These Store Hours

Stock up on all the sparkling cider to usher in 2023.

It’s New Year’s Eve, and whether your party plans are going to a soiree or wearing some sweats and sink into your couch, you might not have been planning on making a Costco run. But running out of diapers (or artichoke dip) can do that, and you might find yourself scrambling to locate your Costco membership card and keys. No matter what the reason, you’ll need to know Costco’s New Year’s Eve and New Year’s Day hours, because you don’t want to miss out on those mega-sized muffins.

So the good news is that Costco can be an option if you need to buy anything from spirits and soda, to last-minute party apps or even a rotisserie chicken and sides for a simple New Year’s Eve supper. The bad news is that you’ll need to get there sooner than you might have anticipated, since Costco’s New Year’s Eve hours in 2022 mean that the store will be closing at 6 p.m. (and not their usual 8:30 p.m. closing time).

Now, if you’ve shopped at Costco, you know that it’s almost impossible to walk in for just one thing and not leave with a cart full of food, electronics, décor, or even clothing. If you’re planning to head to Costco on New Year’s Eve, be sure that you budget plenty of time so that you can snag the sales — and not get stuck on a super long line.

As you’re waking up to a new day (and year), your plans might include snuggling in bed with your little loves — and not stepping into a store so soon. Still, life happens, and you might need to get some baguettes for breakfast, or an extra bag of chips so that your kids don’t duke it out over the remaining Doritos that you have in your house. Unfortunately, you might have to shop elsewhere since Costco is closed on New Year’s Day 2023. Some stores, like Target and Walmart, are open, along with an assortment of supermarkets like Whole Foods, Stop & Shop, Publix, and Kroger, so you’ll be able to pick up some supplies to survive the day. Just be sure to call ahead, since those stores might also be operating on a shorter schedule.

And as far as Costco is concerned? If you can get there early enough on New Year’s Eve, you should be well stocked with dino nuggets, snacks, and cereals, which is pretty much all the food your kids are going to eat, anyway.