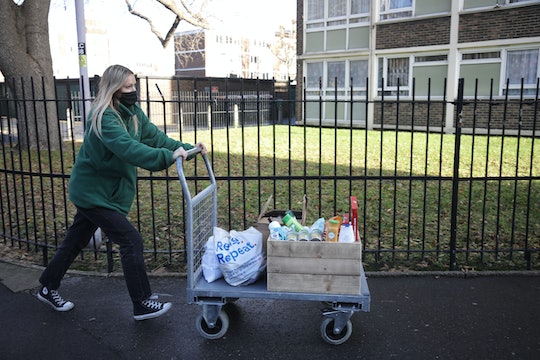 Food insecurity is a growing problem.

It's a terrible picture to imagine: A parent sits their child down at the dinner table with a plate of food and watches them eat. They have nothing in front of them, no food to give them energy to get through the day. To raise their kids. No clear path to where their next meal might come from, or the meal after that. And it's not getting better any time soon, according to a new poll which found COVID-19 has made food insecurity worse for families than ever.

So what do parents do when they don't know where their next meal might come from? When they have no financial support from the government during COVID-19 like the stimulus checks that have not yet been approved?

According to this poll, 37% of parents simply went without food to make sure their kids could eat.

Parents are going without food to feed their kids during COVID.

Surbhi Martin, Vice President of Two Good Yogurt parent company Danone North America, told Fatherly that one of the surprising issues is that COVID-19 has made food insecurity an even bigger issue. "We found that for nearly 40% of respondents, COVID-19 contributed to their first experience with food insecurity. The majority of those surveyed (63%) also did not realize they were food insecure – indicating a clear discrepancy in our collective understanding of what constitutes food insecurity in the first place.”

The American Public Health Association backs up these numbers, noting in August that food insecurity in the United States more than tripled in March and April 2020 after the pandemic hit the country. Food insecurity is defined by the association as a "lack of access to sufficient, nutritious food for an active, healthy life," leaving people worried about where they might get their next meal and often skipping meals because they can't afford to eat. Prior to the pandemic about 10% of households were food insecure, as per CNN. Now about 40% are struggling.

Families who are experiencing food insecurity can check out local food banks for help, but even food banks have been hit hard during the pandemic.

People need help. Hopefully stimulus checks will be on the way soon. Hopefully that will be enough.