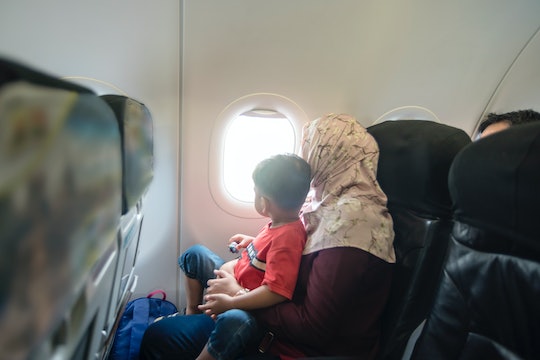 Finally, Airlines Have Been Told To Stop Charging Parents To Sit Next To Their Kids

Why is this still a thing?

Flying with kids isn’t exactly a treat. Generally speaking, kids don’t really like to be stuck in their seat for long stretches or expected to keep their voices down or deal with turbulence. It’s a lot to manage, and really their parents are the ones who need to manage it. For everyone’s benefit, in fact. So why have some airlines been charging parents extra fees to ensure they sit beside their children during a flight? Well, that practice may be changing soon enough. Earlier this month, the U.S. Department of Transportation (DOT) issued a notice to airlines urging them to do “everything in their power” to make sure parents sit with their children for no additional cost.

“The Office of Aviation Consumer Protection (OACP) has issued a notice urging U.S. airlines to do everything in their power to ensure that children who are age 13 or younger are seated next to an accompanying adult with no additional charge,” the department said in a noticed released on July 8.

The notice comes after the DOT said it continues to receive complaints from parents about seating arrangements on flights. “Although the Department receives a low number of complaints from consumers about family seating, there continue to be complaints of instances where young children, including a child as young as 11 months, are not seated next to an accompanying adult,” the notice reads.

The department has now given airlines four months to update their seating policies. After that, the OACP will “initiate a review” of airlines’ practices and complaints. “If airlines' seating policies and practices are barriers to a child sitting next to an adult family member or other accompanying adult family member, the Department will consider additional action consistent with its authorities,” the notice added.

Families have been charged in the past by airlines to sit next to their children, according to Consumer Reports, particularly on low-cost flights where customers have to pay to reserve seats online in advance. In some cases, airlines don’t even give the option to reserve seats together, meaning parents might not even be able to pay to be with their children. This poses many safety risks, especially if there happens to be an in-flight emergency and parents are unable to get to their children. A Consumer Reports petition started in 2020 urging airlines to stop charging parents to sit with their kids was signed by 163,000 people.

The DOT says it “recognizes the importance that families place on sitting together when flying,” according to a statement on its website, emphasizing that it has sent a notice asking airlines to give seating priority to families traveling with kids under the age of 13 years old. If families experience issues with seating in their travels, they are encouraged to file a complaint with the DOT. But, hopefully, with this notice in play, flying will get a bit easier for families.