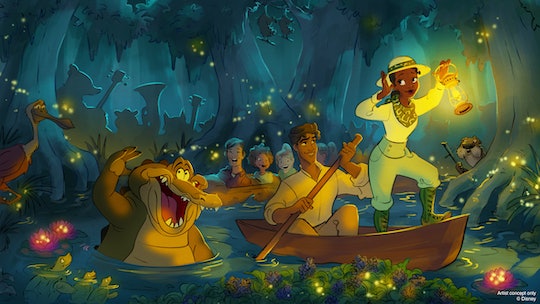 Princess Tiana has a new attraction to call her own, Tiana’s Bayou Adventure!

The new attraction will open in late 2024 at Magic Kingdom Park in Orlando, Florida and Disneyland Park in California. During a panel session at the ESSENCE Festival in New Orleans, Disney Imagineers revealed that the ride will pick up where the movie left off.

Disney Parks released new images of the attraction, showing that guests will join Princess Tiana, Naveen, and their jazz-loving alligator pal, Louis, on a boat ride through the bayou. The attraction will include the voices of Anika Noni Rose, who plays Tiana and original music from the movie.

Disney Imagineers also took time to research the culture of Tiana’s hometown, of New Orleans to capture its authenticity. During their time in the Crescent City, the team visited historic sites such as the French Quarter and, of course, the bayou.

“We have the opportunity to reacquaint people with Tiana who always already loved her from the film,” Charita Carter, Walt Disney Imagineering Executive Creative Producer, said in a video for Disney Parks detailing the research. “We have an opportunity to bring her to a new generation as we're creating a dimensional space for her and it's very important for us as a team because the city has been so gracious and open to us to make sure that we are giving our guests an experience that is a love letter to New Orleans.”

The team also visited historic African American sites in the city such as Congo Square, The Museum of Free People of Color, and Ducky Chase restaurant. Tiana’s story is largely inspired by the real-life story of the late owner of Ducky Chase, Chef Leah Chase. “This is her way of still doing for our city, her community by giving back and as the inspiration for Tiana,” Chase’s daughter, Stella, said during the ESSENCE panel. “We are so happy that her legacy of giving back and her concern for the community will continue because the community in New Orleans is a city that loves, loves everyone.”

Work on Tiana’s Bayou Adventure began in 2020 following a petition that called on The Walt Disney Company to re-theme Splash Mountain. The original 1966 attraction was based on Song of the South, the 1946 Disney movie that is “steeped in extremely problematic and stereotypical racist tropes,” the petition wrote, and critics accused the attraction of romanticizing the Reconstruction-era South.

The Imagineers say Tiana’s new attraction is expected to celebrate NOLA culture and Black joy. “Like the musical city that inspired this attraction, Tiana’s second act is about a community working in harmony to achieve something extraordinary,” said Carter. “She reminds us of an immutable truth we can all relate to: ‘if you do your best each and every day, good things are sure to come your way.’ And that’s a melody we can all sing along to!”