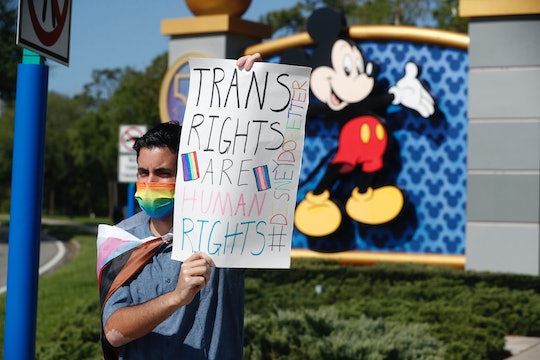 “We have been forced into an impossible and unsustainable position.”

Disney employees in Florida, California, and other states are expected to walk out of their jobs this week, in protest to what some have called a tepid response from Disney CEO Bob Chapek over Florida’s proposed “Don’t Say Gay” bill. If passed, the bill known formally as HB 1557 or the “Parental Rights In Education” would effectively make it illegal to educate students about gender identity and sexual orientation in schools. Florida Governor Rick DeSantis has expressed his support for the bill, and employees of the Walt Disney Corporation have decided to protest in an effort to encourage a more definitive response from Chapek.

After Republicans first voted in HB 1557 on Mar. 7 despite dissent on both sides of the aisle, the Walt Disney Corporation was initially quiet. For several days, the CEO didn’t say anything until there was such an intense backlash that Chapek shared a company wide memo expressing “unwavering support” of the LGBTQ+ community. For some, it was too little too late. LGBTQ+ employees pointed out that “gay affection” was frequently taken out of Disney films, while Variety notes that Chapek allegedly donated to several of the bill sponsors.

Employees are saying enough is enough. The past week has seen employees walking out of their office for 15 minute segments at a time, for example, and Chapek attempted to curb any further walkouts with a virtual town hall meeting on Monday, telling employees that Disney executives were “determined to use this moment as a catalyst for more meaningful and lasting change.”

A website called Disney Do Better Walkout explained in a statement:

“The Walt Disney Company’s (TWDC) LGBTQIA+ community and their allies are determined to take a stand against TWDC’s apathy in the face of the bigoted ‘Don’t Say Gay or Trans’ bill put forth by the FL state legislature. The recent statements and lack of action by TWDC leadership regarding the ‘Don’t Say Gay or Trans bill have utterly failed to match the magnitude of the threat to LGBTQIA+ safety represented by this legislation. As a community, we have been forced into an impossible and unsustainable position. We must now take action to convince TWDC to protect employees and their families in the face of such open and unapologetic bigotry.”

The statement concluded that, starting the week of Mar. 14, they would collectively take action “to make our voices and demands heard.” One such demand is for Disney to “immediately and indefinitely cease all campaign donations” to bill sponsors, as well as “commit to an actionable plan” to support LGBTQ+ employees, per ABC News.

As the biggest employer in central Florida, Disney World’s actions reverberate across the state. Across the country. And beyond. What they say, or don’t say, makes a difference to politicians.

These employees know this. And they’re doing something about it.