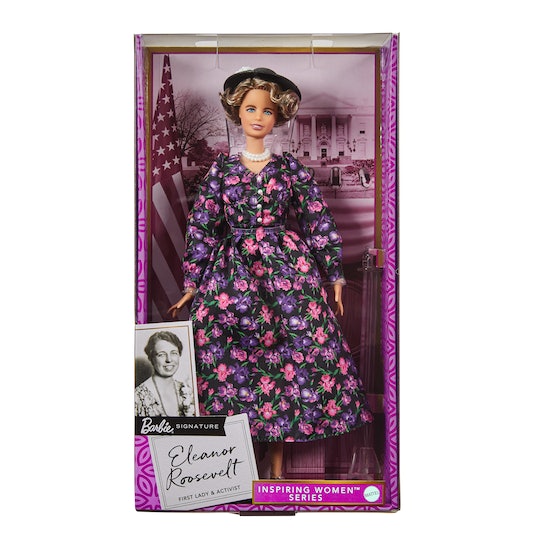 Eleanor Roosevelt Is Now A Barbie Doll & She Is Just Lovely

With the perfect balance of nostalgia and innovation, the Barbie brand has added more than a few diverse, inclusive, and inspiring dolls to their lineup in recent years. So it's no surprise that coming soon to their Inspiring Women series is an Eleanor Roosevelt Barbie doll to honor the longest-serving First Lady of the United States. She will be available at retailers in-store and online nationwide on March 3.

To date, the Inspiring Women series has already given the world a handful of dolls based on incredibly powerful women and remarkable historical role models including Maya Angelou, Ella Fitzgerald, Florence Nightingale, Susan B. Anthony, Rosa Parks, Billie Jean King, Amelia Earhart, Katherine Johnson, Frida Kahlo, and Sally Ride. Each of these dolls so beautifully captures the spirit of innovation and determination of each trailblazer to inspire an entirely new generation of girls to be brave, bold, and genuinely themselves.

As the newest addition to the series, the Roosevelt doll celebrates the former First Lady's work as a humanitarian and activist. During her tenure as First Lady from 1933 to 1945, she was a trusted adviser for her husband, Franklin D. Roosevelt. But above and beyond her duties during that time, she was a persistent advocate for civil, economic, and women's rights.

True to her generous spirit, prior to becoming First Lady, Roosevelt volunteered with the Red Cross during World War 1, according to Britannica. Following her husband's death in 1945, she was appointed to serve as a United Nations delegate, serving as chairperson of the Commission on Human Rights for five years. In 1961, Roosevelt was appointed by President John F. Kennedy as chair of the Commission on the Status of Women.

The new Barbie doll made in Roosevelt's honor sports a stately black dress with bright pink and purple floral details, demure yet fashionable black leggings with heels, a black hat, and an elegant double strand of pearls. I truly wish that I had had a Barbie like this one growing up. The doll's packaging includes an entire biographical overview of Roosevelt's important humanitarian work on the back so that girls can learn all about one of the most inspirational women in our country's history.

Mattel's release of this latest addition to the Barbie Inspiring Women series comes ahead of International Women's Day on March 8. They will also launch the "You Can Be Anything" virtual series on March 6 to honor female leaders of the past like Roosevelt, as well as shine a well-deserved spotlight on the empowering women of the present today. The curated series will run each Saturday in March, streaming live on YouTube and Facebook with 15 to 30-minute segments featuring prominent female leaders and change-makers like Yara Shahidi, and fashion model and activist, Adwoa Aboah.

You can join Barbie in celebrating inspiring women everywhere by adding the Eleanor Roosevelt doll to your collection on March 3 and tuning in to the "You Can Be Anything Series" throughout the month of March.