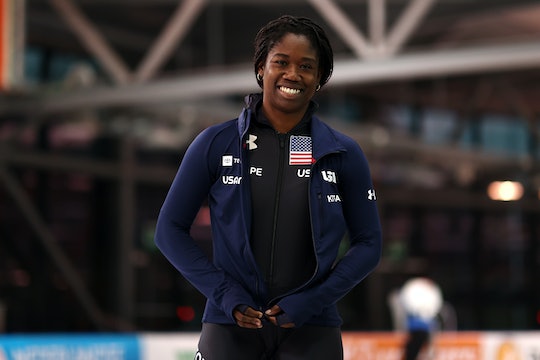 From starting a college fund for her when she was little to moving to Utah to be closer to her, the Olympian’s has a supportive family.

Team USA speedskater Erin Jackson is preparing to slide down the ice once again for the 2022 Beijing Winter Olympics. Jackson, 29, is ranked at the world’s #1 speedskater, so all eyes will surely be on her during this year’s Winter Games with Jackson’s biggest fans, her hardworking father and brother, cheering her on the entire time.

Jackson’s teammate Brittany Bowe gave up her spot to make way for the Florida native to attend the Games, after slipping and falling during the trials and failing to qualify. But Bowe knew her friend deserved the opportunity. “After that unfortunate slip, I knew in my mind before that night was even over that if it had to come down to a decision of mine, she could have my place,” CNN reported Bowe said. The two grew up together in Ocala, Florida, and have been friends for years.

It’s that token of friendship and kindness that has earned Jackson a trip to Beijing, in hopes to secure the gold. Last year, the University of Florida alum became the first Black woman to win a speed skating World Cup and in 2018, she became the first Black woman to make a U.S. Olympic long track speed skating team for the Pyeongchang Winter Games.

Aside from Bowe, who will still be competing in the 1,000m and 1,500m events in Beijing, Jackson’s village of support includes her family.

Her Father Is A Veteran

Jackson’s dad, Tracy Jackson, is a retired Army veteran and a retired fire truck builder. Her mother, Rita Jackson, was a pharmacy technician and sadly passed away while she was in high school. The Olympian told NBC Olympics that her dad recently moved from Florida to live with her in Utah.

“We now have a house together near the Olympic Oval,” Jackson said.

Jackson told NBC Olympics that her brother, Corey Farmer, lives in Florida with his wife and works in the roofing industry.

“Since both of my parents came from large families, I have a very large extended family, she said.

Her Parents Started A College Fund For Her

The value of education was instilled in Jackson by her parents. She told Forbes she was tricked into thinking books and dictionaries were cool and her parents started a college tuition fund for her when she was little. “My parents were really education-focused,” she said. “They made sure I had all the right opportunities for school. They started a college program to pay for tuition when I was a kid.”

Needless to say, their money was put to good use. Jackson graduated from UF in 2015 with an engineering degree. After the 2022 Winter Games, she shared with Forbes that she is thinking about pursuing a master’s degree in biomechanics.

An interesting tidbit about her 2018 Olympic ventures is that she didn’t even tell her father she was pursuing them in the first place! Jackson said she didn’t share with her family that she was going to the Olympic trials because to her, it was just a race.

But it was a race that solidified her place in history! Pretty sure dad wasn’t too upset, following the aftermath, including the latest face of Sports Illustrated. “I welcome being a trailblazer,” Jackson said. “I hope I can make a difference.”

In a touching Instagram post featuring photos of her with her parents, Jackson shared that her mother passed away a day after her father’s birthday. “I'm always sad for my dad that the day after his birthday is such a tough one. It's been 10 years since my mom passed away, but we still miss her every day,” she wrote. “I wish she could have seen me graduate from high school or college or compete in the Olympics.”

“I'll forever be grateful to my parents,” she continued, “for the sacrifices they made to help me excel in academics, athletics, and life.”