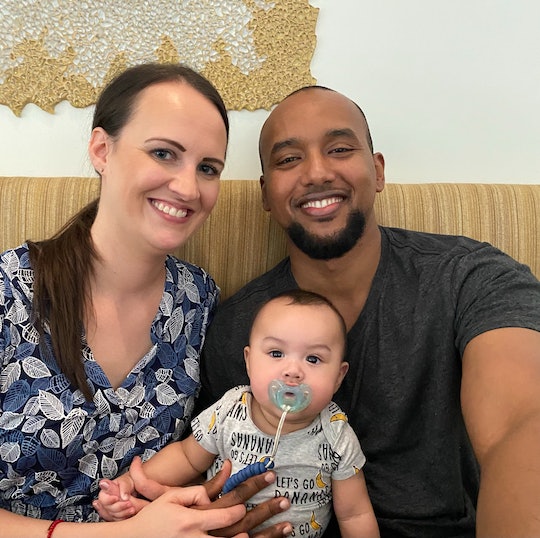 Courtesy of the Kahin Family.

When Erin Kahin saw Gerber’s annual photo search for the company’s new spokesbaby on Facebook, she was joking when she told her husband Mike that they should enter their new baby, Zane. But Mike was on board. “He said ‘Yeah, why not? Let’s find out if he’s really cute!’” Erin tells Romper. So, on a whim, they submitted Zane’s photo. Even though they were confident in Zane’s adorability, it was still a shock when Gerber told them they were the parents of 2021’s Gerber Spokesbaby and the company’s first ever Chief Growing Officer (CGO).

The excitement of the win came fairly swiftly on the heels of the fact that, not so long ago, the Kahins weren’t sure they’d be able to have children. When Erin was 27 and single, she was diagnosed with breast cancer. “They called it a tumor,” she remembers. “So they were nice and didn’t use the C word, but the very next question was whether or not I wanted to have children just because just to this day there’s still uncertainty of the full impact of the treatment that I was about to receive.”

Through chemotherapy, radiation, and a double mastectomy, Erin worked with her “amazing” doctors to do everything they knew how to protect her ability to have children one day. And when she and Mike got married, they spoke to her doctors again about starting a family. “They all gave the same response: We didn’t didn’t know what was going to happen unless we tried.”

So they tried. Soon after, their 10-year-old dog Rexy seemed to get inexplicably sick. “That’s how I found out I was pregnant — [Rexy] was stressed out!” Erin says. After thinking it would never happen, they were pregnant faster than even more optimistic Mike had expected. Erin’s doctor called it a “textbook perfect” pregnancy.

Erin says that the news has barely sunk in yet, but that the announcement was a thrill. Now 5 months old, Zane is a happy, healthy baby who brings joy to his whole family... with one exception. “Rexy could care less about Zane,” Erin jokes. “But my other one, Liv, is Zane’s best friend. Every time she can get close she’ll come up and sniff him and he’ll reach his hand out to her.”

And where does that winning smile come from? She credits Zane’s adorableness to her husband... and her own premonitions. “When I was pregnant, I had a dream that he was going to be a boy and then we found out he was a boy, and then I had a dream he was going to look like Mike, I was convinced,” she says. “When he was born, from the moment they put him on my chest I knew it.”

Though Mike didn’t see it at first, she says, he is now a believer in the family resemblance. “Oh now [that he’s the Gerber Spokesbaby] you want to claim him!” Erin jokes.

News of the announcement spread to Zane’s daycare, where fellow parents have cooed over the tiny executive. “People say ‘Oh he definitely looks like a Gerber baby’” Erin says with a laugh. “Well, he is the Gerber baby!”

Fortunately, fame has not changed Zane’s sunny disposition. “He’s a character for sure. He really is a comedian,” she says. “Even his moments aren’t even really moments. You just look at him and he pops a smile.”