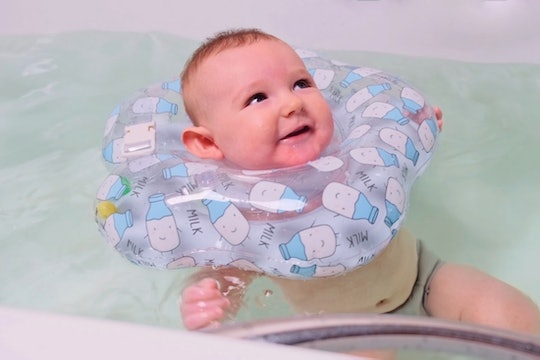 The warning comes after one baby died and another was hospitalized.

When taking your baby to the pool or the beach this summer, there’s one item the Food and Drug Administration (FDA) doesn’t want you to pack: a baby neck float. After one baby was hospitalized and another died while using one of these infant swim accessories, the FDA is warning parents not to use baby neck floats.

On Tuesday, the FDA issued a warning about the use of baby neck floats, inflatable rings fitted around an infant’s neck that are ostensibly used to help them float. Some of these neck floats, which are meant to give babies the opportunity to float freely in the water, have been marketed for babies as young as two weeks old.

“The risks of using baby neck floats include death due to drowning and suffocation, strain, and injury to a baby’s neck. Babies with special needs, such as spina bifida or SMA Type 1 may be at an increased risk for serious injury,” the FDA wrote in a statement. “While the FDA believes that death or serious injury from neck floats is rare, health care providers, parents, and caregivers should be aware that these events can and do occur. It is also possible that some cases have not been reported to the FDA.”

This warning comes after one baby died and another was hospitalized after using a baby neck float. The FDA notes that the babies were not being monitored by caregivers in either case.

This is not the first time experts have sounded the alarm about baby neck floats. When they first became popular back in 2017, Kyran Quinlan — an associate professor of pediatrics at Rush University Medical Center, who has also served as chair of the American Academy of Pediatrics Council on Injury, Violence and Poison Prevention — said the popular new devices are “potential death traps.” Quinlan said at the time, “Neck floats for babies scare me to death, and I hope they scare parents. To have your precious baby one poorly sealed seam away from going under at the pool is frightening.”

Baby neck floats have not yet been recalled or taken off the market, but parents might want to seriously reconsider before using with their baby this summer.

More Like This
How Hot Is Too Hot For Babies? Experts Weigh In
"Crybaby Ambulance" In Europe Will Help Exhausted Parents
Double Your Fun With These Instagram Captions For Twin Pics
30 Marvelous Baby Boy Names That Start With “M”